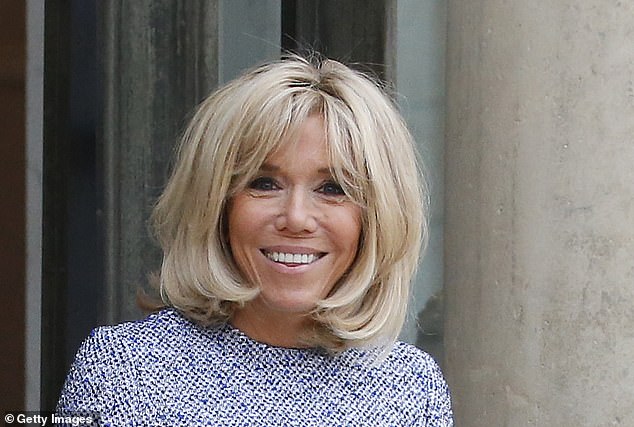 The cute little girl with a pudding bowl haircut sitting on her mother’s knee is Brigitte Trogneux.

Her family are well-known chocolatiers and confectioners from the Amiens region in northern France, where Trogneux is as famous as Thorntons.

But the family — or rather the youngster in the photograph — has another, much greater claim, to fame today.

She grew up to be Brigitte Macron, France’s first lady, wife of President Emmanuel Macron. Trogneux was her maiden name.

This black-and white portrait of the Trogneux family, which includes her siblings and parents, was taken in the 1950s.

Who, if anyone at all, could have predicted that it would, more than 50 years later, be used to smear Brigitte by the far-Right.

Even though their conspiracy theories are poisonous, the latest conspiracies aimed at undermining Madame Macron during the French presidential election in May, where her husband will be compared against two Right-wing populists is not surprising.

The false claim made by far-Right magazine Faits et Documents (Facts & Documents) is that Brigitte Macron, 68, was born male.

The claim initially went unnoticed when the small monthly publication went to press with the results of its so-called ‘three-year investigation’ into Mrs Macron in September.

But when ‘correspondent’ Natasha Rey — who contributes to the journal and has a history of attacking the Macrons on Facebook — gave an interview on YouTube earlier this month, the allegations went viral online.

She also mentioned the Trogneux family picture in her interview. The little girl sitting on her mother’s knee, she claimed, is probably Natalie Farcy, who was orphaned when Brigitte’s older sister, Maryvonne, was killed in a car crash, along with her husband, Paul Farcy, when Brigitte was very young. 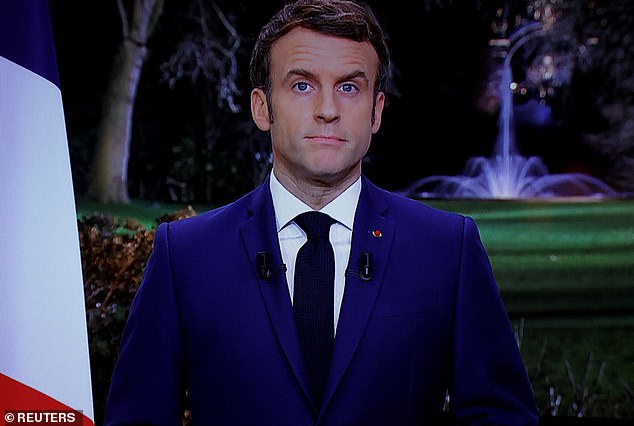 Brigitte is her name? Her birth name, she claimed, was Jean-Michel Trogneux — the boy in the checked shirt in the photograph — before ‘he’ became a transgender woman and underwent a sex change operation in the early 1980s.

You couldn’t make it up, could you?

False claims are spread by websites associated with anti-vaxxers and far-Right groups, such as the Yellow Vests antigovernment movement, QAnon extremists, and the Far-Right.

The attack on Mrs Macron has led to fears of the ‘trumpization’ of political debate in France, with fake news being used to potentially sway voters, particularly by the far-Right who already enjoy widespread popular support.

Marine Le Pen’s National Rally, a rebranding of Le Pen’s National Front, secured a first-place finish in France in the last European election and Eric Zemmour, who uses the language of Enoch Powell, has been riding high in the polls; both will challenge Macron in the upcoming presidential election. 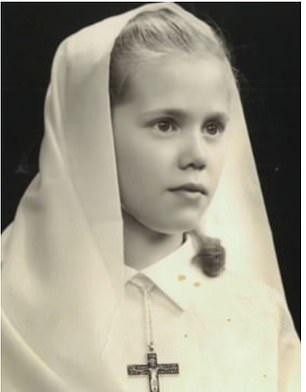 The attack on Mrs Macron has led to fears of the ‘trumpization’ of political debate in France, with fake news being used to potentially sway voters, particularly by the far-Right who already enjoy widespread popular support

The ‘trigger’ for the pseudo-investigation in Faits et Documents — ‘The Mystery of Brigitte Macron’ — was her ‘physique’, according to Miss Rey, who claimed that ‘experts’, including cosmetic surgeons, ‘all agree with me that [Brigitte Macron] is a transsexual’.

This may sound absurd but YouGov found this year that 38% and 33% of Americans believed conspiracy theories, respectively, which is higher than the British (19%).

The dirty tricks campaign against the Macrons illustrates how easily fiction can be turned into fact with just a few clicks and a hashtag in today’s world.

Our own research suggests that the ‘boy in the checked shirt’ the far-Right claim is Brigitte is possibly her late older brother Jean-Claude. Brigitte was 8 years younger than him and he became the manager at the family’s chocolate factory.

France has a strict policy regarding birth certificates. It is not like the UK where you can get them by either the individual whose name appears on it or their relative.

However, the news of Brigitte Macron’s arrival in the World was first published by the Courrier Picard daily newspaper, Picardy, of which Amiens is the capital. The Courrier Picard records her birth as April 13, 1953.

Referring to Brigitte’s three sisters and two brothers, it reads: ‘Anne-Marie, Jean-Claude, Maryvonne, Monique and Jean-Michel Trogneux have great joy in announcing the arrival of their little sister, Brigitte.’

The Faits et Documents magazine says Elysee officials ‘had been unable to provide a photograph of Brigitte as a child’.

Many were published in French newspapers, one being a young Brigitte celebrating her first Holy Communion. Another was a picture of her enjoying the gardens of her house, as well as a photo of her with Andre-Louis Auziere (her first and late husband).

Before she entered the Elysee Palace in 2017 as the wife of the youngest president in French history — she was 64, he was 39 — Mrs Macron, a former teacher, told her pupils: ‘You’ll hear remarks, true and false. I’ll never talk about them.’

She is making an exception in this case, however, and is taking ‘legal action’ for libel against the instigators of the claims in Faits et Documents, her lawyer Jean Ennochi confirmed this week.

The story of Brigitte Merkel is fascinating, but not without controversy.

She met Emmanuel Macron her first time in September 1992. A 39-year-old mother of three, she worked as a teacher at the French Catholic high school in Amiens. She was fourteen years old and her son was in the same school as her daughter. 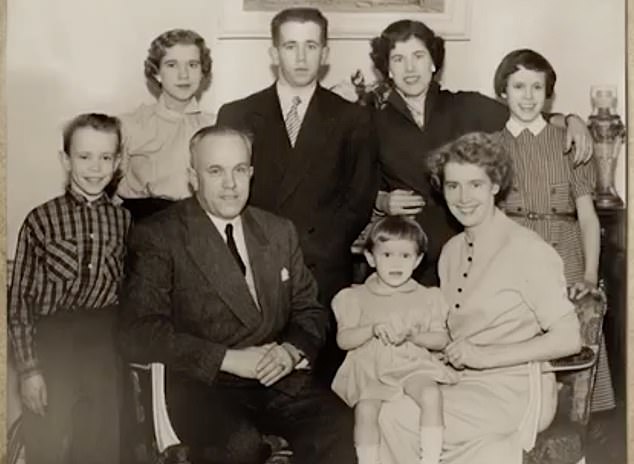 The cute little girl with a pudding bowl haircut sitting on her mother’s knee is Brigitte Trogneux. Her family is well-known chocolatiers and confectioners from the Amiens region in northern France, where Trogneux, the premium Trogneux brand, is as famous as Thorntons.

Their gap of 24-years still brings gasps. This is except for France, where it has been long celebrated that older women have a special appeal.

The cover of Paris Match, as well as other magazines, often features Mrs Macron. She’s been compared with Brigitte Barrot and Catherine Deneuve. So much for being ‘born male’.

Throughout their 14-year marriage, she has played a key role in his political career, ‘somewhere between a spin doctor and eminence grise’, to quote one commentator.

Their friendship developed over the years in Amiens and caused local fury.

Brigitte’s family ran the confectionery shop in Place Notre Dame, in the centre of Amiens, now the flagship branch of the Trogneux chain which has 12 other branches across northern France.

Macarons were their speciality, which are sweet treats made with almonds honey and egg whites.

Her father, who was an example of respectability and regular attendee at church, was also a Rotarian Club member.

He knew his daughter from Sacred Heart school and they all watched as she grew up to be the youngest of six siblings.

Her family called her the ‘happy little Princess’. ‘It suited her perfectly — she was a lovely little girl who was always the centre of attention,’ said a family friend.

Another Amiens resident who knows the family well added: ‘She was always getting wonderful presents and being treated like a princess. She was a real little girl who liked to dress up and put on her mother’s jewellery.

‘She used to be given silver bracelets and the like from her parents. When she passed her exams, they got her a moped.’

She met Andre-Louis Auziere when she was 21 years old, while on vacation to Le Touquet (where her family owned a holiday home), where her father, a diplomat, was working.

Brigitte was only 23 and he was already two years younger than him. He had also embarked upon a career in banking that would prove to be successful.

They were duly married in the local town hall in 1974, the same year Emmanuel Macron’s parents were married, incidentally.

Brigitte had already been 26 when two boys and a girl arrived.

Despite these easily checked, verifiable facts, the Faits et Documents magazine has persisted with its scurrilous ‘she was born a male’ narrative, which has attracted a huge online audience in the same way that similar lies about Michelle Obama being a man did in the US. One thing is certain: Brigitte will eventually be a teacher at Lycee La Providence Catholic School in Amiens.

Drama was one class she attended. Emmanuel Macron, whose father and mother were doctors, was her star pupil.

Rumours of an affair between the parents shocked both sets. To finish his studies, Emmanuel went to Paris as a teenager. They remained in contact for thirteen years. The rest is, they claim, history.

‘There are times in your life when you need to make vital choices,’ Mrs Macron would explain in an interview many years later.

‘And for me, that was it. The 20-year span of time has shown us nothing. Of course, we have breakfast together, me and my wrinkles, him with his youth, but it’s like that.’

There were no public sightings of Brigitte’s first husband after she left him in 1996 and he died in December 2019, aged 66.

Sebastien, their son at 46, is only two years younger than Emmanuel Macron (his stepfather) and now works for him in statistics.

It’s not hard to understand why, given the circumstances, their father kept such a low profile.

France’s biggest selling newspaper, Le Figaro, has denounced the attack on Brigitte Macron as ‘false transphobic information’ based on ‘absurd rumours’, while rival newspaper Le Monde said the claims are the work of ‘conspiracists’.

But, because we live in a world that is so different, it’s not surprising that people all over France will feel convinced.