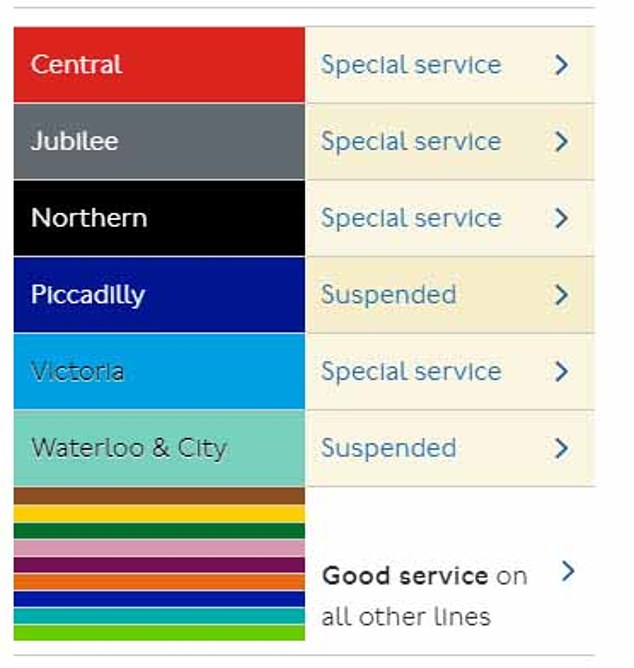 Following a breakdown in talks between Transport for London and union leaders, Rail, Maritime and Transport union members started a series of 24 hour walkouts.

According to the union, members of their organization will now be required to work night and day shifts following the departures of dedicated night staff.

The Victoria, Central, Northern, Piccadilly and Jubilee lines were brought to a standstill at 4.30am today, causing further disruption for the Bakerloo, Circle, District, Hammersmith & City and Metropolitan lines.

TfL warns that these lines will be disrupted starting at 7 p.m. each weekend, a significant blow to December revellers.

TfL sources told The London Evening Standard that not much had changed since announcement of the industrial action, however that TfL is open to discussing the matter with RMT.

TfL warned people about disruptions in services and encouraged them to verify before traveling.

Due to the pandemic, the Night Tube was temporarily suspended and will reopen on Friday.

The Victoria, Central, Northern, Piccadilly and Jubilee lines were brought to a standstill at 4.30am today, causing further disruption for the Bakerloo, Circle, District, Hammersmith & City and Metropolitan lines

Also, the Central and Victoria lines will be open from 8.30pm until 4.30am every Saturday and Sunday between now and December 18.

Which Tube lines are affected? Why is the strike by drivers?

How will Tube lines be affected?

TfL announced that Tube Lines will be affected.

Why is it that Tube drivers are so striking?

TfL revealed that London’s Night Tube service will be resumed on November 27th at Central and Victoria lines.

On Fridays and Saturdays of each week, the north-south Victoria Lines and east-west Central Line were to be operational overnight.

RMT claims that the RMT’s rota change has resulted in “unacceptable, intolerable demands” on its members and their work/life balance.

Underground drivers protest over the staff rotas To restart the Night Tube. It is expected to resume service late Saturday night on both the Victoria and Central lines.

TfL insists all other Tube unions agreed in May to the change in the rotas, which came after 200 Night Tube staff were integrated into TfL’s ‘day Tube’ workforce, and called the strike action  ‘unnecessary’.

Mick Lynch, RMT’s general secretary, said that Tube bosses had’refused point blank’ to address the serious grievances at heart of the dispute. However, he added that talks are still possible with the union.

Union claims that the changes made have led to ‘unacceptable, intolerable demands’ from its members.

Similar strikes on the same topic were also planned in the summer. They were called off following ‘last-ditch talks’ with TfL.

Mayor Sadiq Khan and TfL are ‘confident’ of being able to restart the night services but said they may be able to run fewer Tube trains than hoped.

TfL might be more affected by the ASLEF union’s threats that members may strike to stop changes in TfL’s pension systems.

TfL must conduct an evaluation of its pension plans as part of the Government’s funding agreement.

Finn Brennan (ASLEF Tube Organiser) stated that there will be an “intensified and hard-hitting strike across the London Underground” in case of changes. He did not specify when but it is known.

Sir Brendan Barber (ex-TUC general secretary, and currently head of ACAS) has been named to oversee a “truly independent” review of TfL pensions.

Andy Byford, TfL Commissioner, stated that there was no predetermined outcome to the review. He also said that he would report back in due time.

Lynch released a statement saying that this strike was about the end of the popular, family-friendly agreements that were key to the success of the original Night Tube.

“Instead of cutting costs, the company would like to lump all drivers into one pool that allows them to be removed from post to post at their will.

“We made every effort to reach a solution in ACAS and through direct negotiations since the start of the dispute, but it is evident that LU bosses are motivated solely by their bottom line. They have no concern for the welfare or service provided to passengers.

This strike, with its severe consequences for Christmas Eve, could have been prevented if Tube management didn’t remove dedicated Night Tube employees and make perfectly acceptable arrangements to decrease staffing and cut costs.

“The union continues to be available for talks, even in this very late stage.”

Nick Dent (Director of London Underground Customer Operations) stated that “The RMT’s planned strike action was not necessary and it would threaten London’s recovery from the pandemic.” He said, “Despite no job loss and greater flexibility for drivers, this will ensure there is more job certainty and less job uncertainty for Londoners.”

“While all other unions have agreed to the changes, and our employees have enjoyed the benefits since August,” said the RMT. They are willing to collaborate with RMT to review and revise the changes once Night Tube service has returned.

“This review will only succeed if we have the RMT meet with us and withdraw its action, so that all of us can see the practical effects.

Londoners are advised not to travel during planned strike days if the RMT does not engage with them.