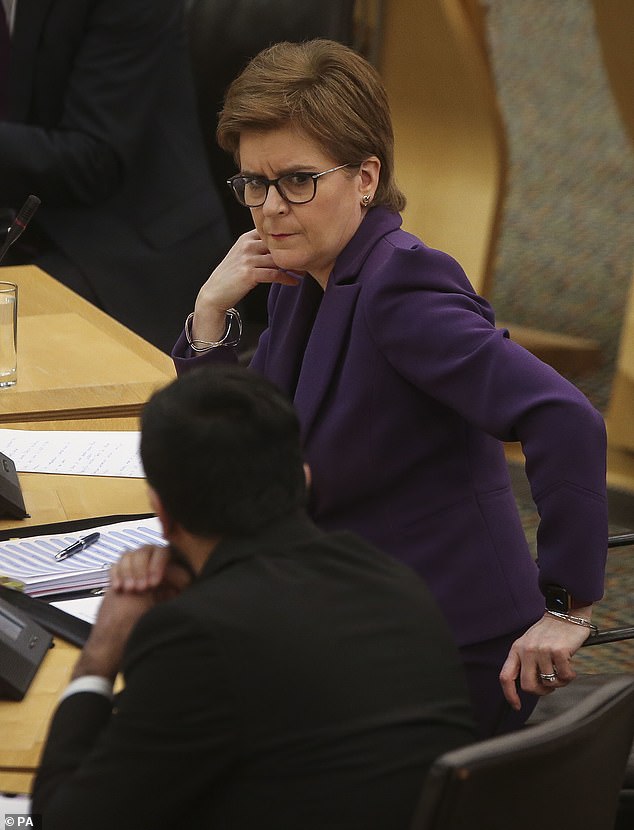 Sturgeon is in hot water after a poll found 53% want to remain in the UK… even though she DID support independence. She renewed her vow to hold a referendum

Nicola Sturgeon suffered a blow today as a poll found that 53 per cent of Scots want to stay in the UK – after she denied that support for independence is fading.

YouGov research suggested that another SNP attempt to break the union would not be accepted by voters, even though Ms Sturgeon renewed her promise to hold a referendum.

There were only 47% who supported independence, which is the same as May. However, this was lower than the July 2012 Covid crisis.

Since then polls showed support for separatist causes steadily falling, and Ms Sturgeon’s responses to the pandemic have come under fire.

Last night, when Ms Sturgeon was asked by the BBC if the evidence indicated that support for her position was declining, she replied: “No. It doesn’t.”

She referred to Holyrood’s last elections and claimed that “45% of the people voted in independence”.

Asked if she would push for a referendum the following two years, even though polls suggested that it would not be successful, Ms Sturgeon responded: ‘Yes I will push to have another independence referendum.

Nicola Sturgeon was pictured at Holyrood today. A poll revealed that 53% of Scots would like to remain in Britain. This is despite her denying that the support for independence has waned.

YouGov research suggested that another SNP attempt to break the union would not be accepted by voters, even though Ms Sturgeon renewed her promise to hold a referendum

Last night Ms. Sturgeon gave an interview in which she pledged that she would serve the full term of First Minister.

She said she would lead the country until at least 2026 with a blast at her critics after recent speculation that she could quit early.

If she remains in post for the next five years she will have spent 12 years in power, longer than Margaret Thatcher and Tony Blair spent as UK Prime Minister.

Boris Johnson has found her to be an irritation and is now trying to manage her desire for a Scottish independence referendum.

She said, “It almost seems like my opponents believe they cannot beat me or remove from office myself, so they are kind of crossing fingers that I will remove myself from the office.”

They will be very disappointed that I am going to continue to be there for them.

Boris Johnson has found her to be an annoying constant, and is now trying to stop Johnson’s drive to hold a referendum on independence for Scotland.

“I was elected 7 months ago after I asked the people of Scotland to place their faith in me for a 5-year term as First Minister.

“They trust me, and they elected me again. As a nation, we face difficult times and I plan to fulfill that mandate.

In May’s election, Ms Sturgeon’s SNP remained far and away the largest in Holyrood, but fell agonisingly short of an overall majority by a single seat, in a blow to her separatist ambitions.

Ms. Sturgeon wanted to achieve or exceed the 65-seat requirement to have a strong mandate for holding a second vote in 2014 against Boris Johnson’s Westminster Government.

In her conversation with the radio host, she was less impulsive about the future. According to 51-year old, she wants to remain’relatively young’ when it comes to considering other options.

In an October interview with Vogue she  revealed that she and her husband might foster children in the future when she leaves politics.

Peter Murrell (56) is the chief executive of SNP. She has no children with her. After seven years of dating, they spend some time together at Bute House but most of the time live in their home in Glasgow.

Ms. Sturgeon, who revealed that she had miscarried in 2011, spoke out about her pain and the grief of having lost a child at 40.