Official data today revealed that 7 percent of Covid-related deaths in England and Wales were reported last week. This is despite flu deaths continuing to increase.

The ONS stated that Covid was mentioned on approximately one-third (or 7.9%) of deaths recorded during this week.

But the number of people dying where flu was the primary cause is continuing to increase, with 452 fatalities recorded during the week — up 8.4 per cent on the 392 recorded the week before.

Experts warn that there is a double danger for the NHS this year from Covid and flu. Lockdowns have decreased adults’ immunity to the former, which causes almost half the deaths of coronavirus.

Overall, the number of people dying in England and Wales increased 0.4 per cent during the week to 12,103, with 3,146 of those counting as extra of ‘excess’ deaths.

The ONS statistics showed that more than 78,000 extra deaths occurred in private homes across England and Wales, since the pandemic.

The figures come after Department of Health data yesterday revealed Britain’s Covid crisis was falling on all three fronts — cases, deaths and hospitalisations — with

Eight new Omicron cases were discovered in England yesterday. This brings the total number of Omicron infections in the UK to 22. No10 announced a new booster vaccination program that will give triple vaccines to adults until the end of January. 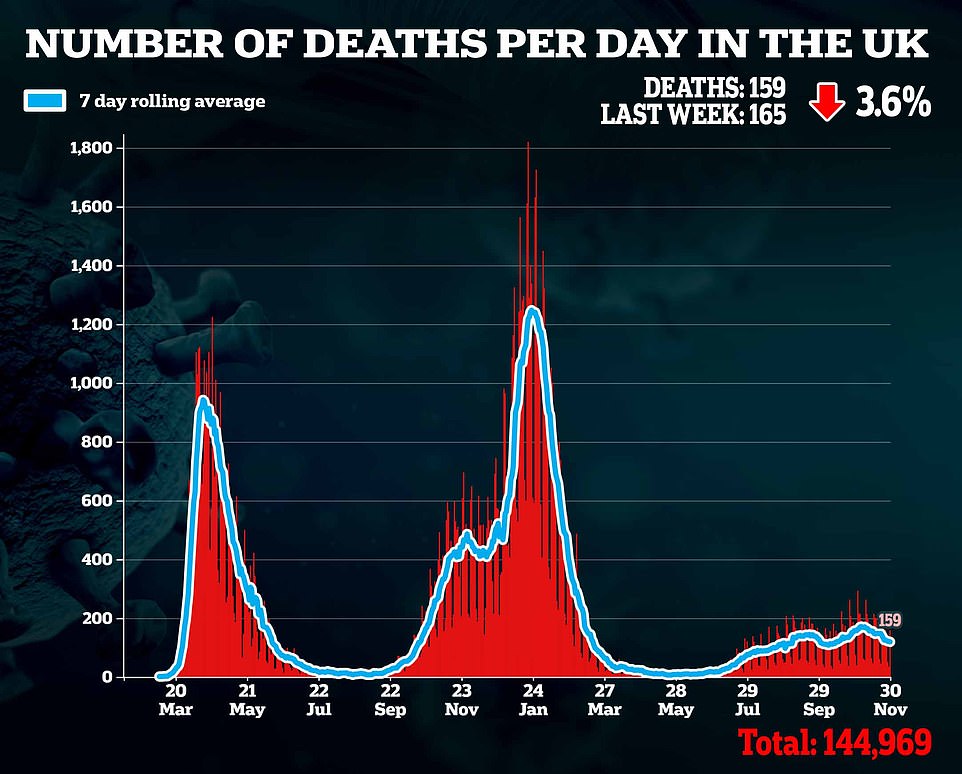 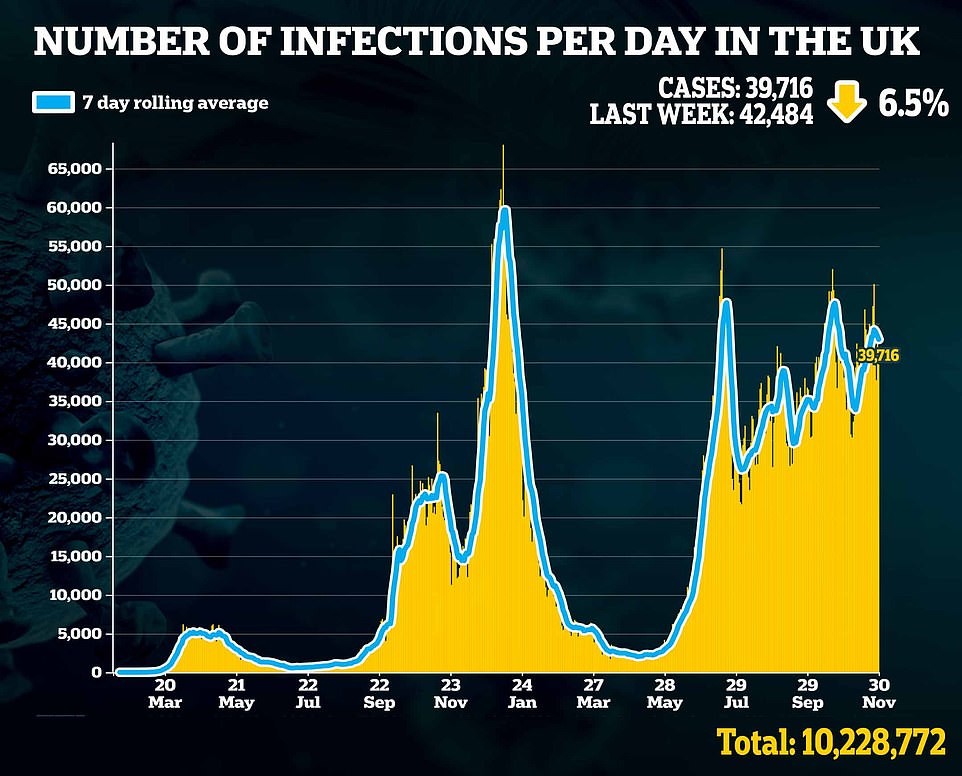 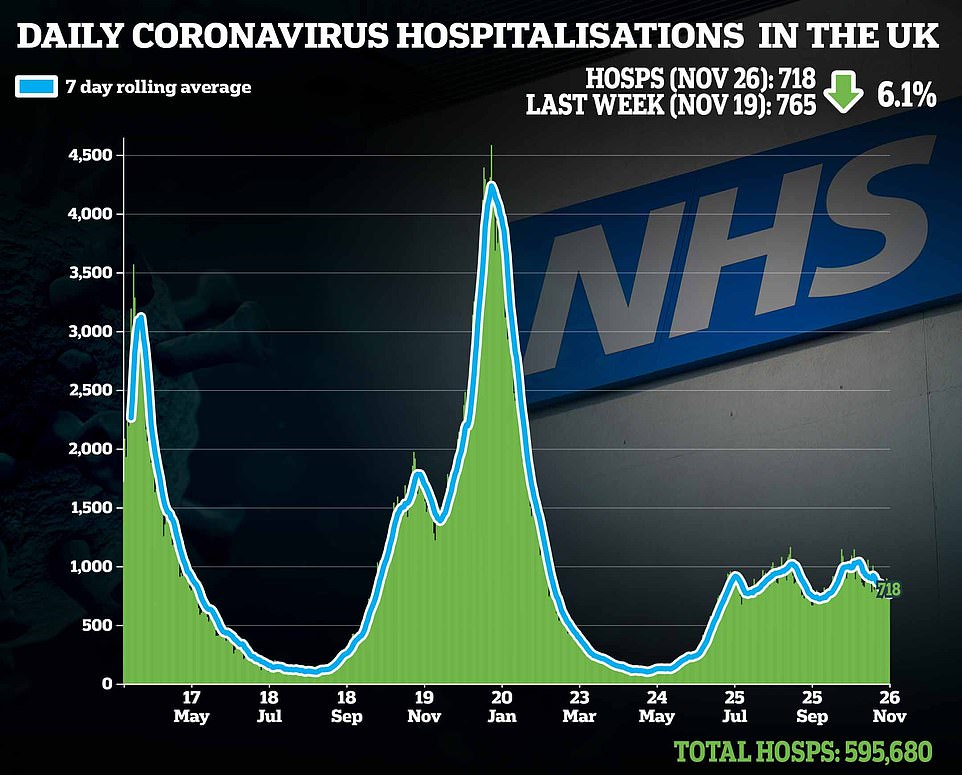 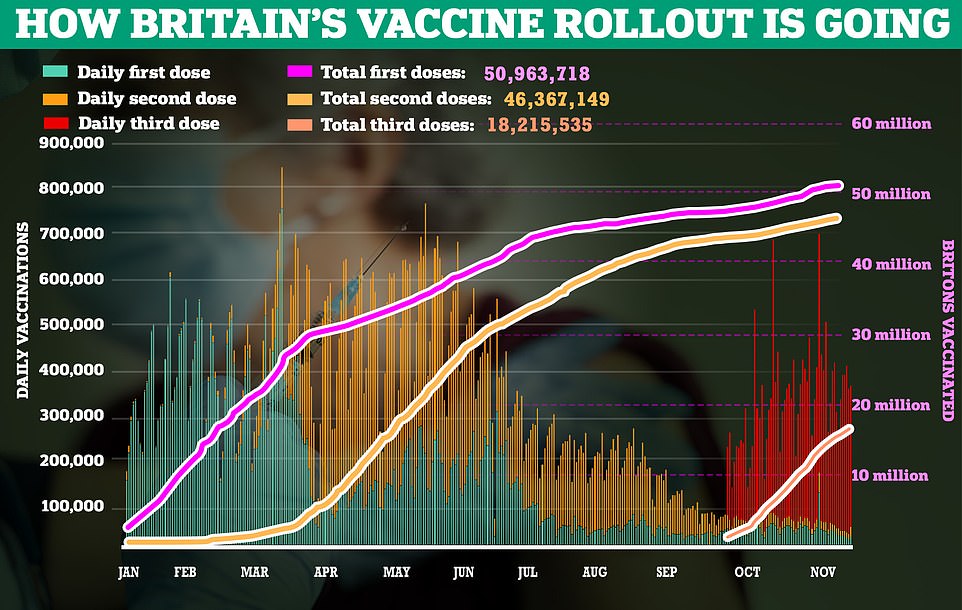 Figures show that nearly 80,000 additional deaths were caused by the pandemic in homes.

Official data revealing the death toll from lockdowns shows that nearly 80,000 people have died at home since pandemic began.

Office for National Statistics (ONS) figures show the number of people dying in England and Wales increased 0.4 per cent in the week ending November 19 to 12,103, with 3,146 of those counting as extra of ‘excess’ deaths.

It takes the total number of excess deaths since March last year up to 78,000.

Since 2005, the number of home deaths in England and Wales have steadily increased. Thousands more chose to die at home than in a hospital.

The proportion rose to nearly 33% in 2020, compared to last year, when Covid told Britons to’stay at home’ to protect the NHS and to save their lives.

Figures for 2021, which were up to June, showed that there were almost 25,000 more deaths in the home than the average for the period of five years. This casts doubt on lockdown as the only reason.

While Britain was in the third lockdown, at the beginning of 2021 the Government relaxed its messaging about’stay home’. The NHS was instructed to treat non-Covid patients.

Many have questioned the wisdom of locking down people and whether they were doing more harm than good to national health. The lockdowns led to many people not seeking treatment for their illnesses due the fear of contracting the virus.

Experts called for additional research that will determine whether or not people prefer to die at their homes, or whether they are left with the burden of a failing system.

On the other hand, 101 deaths from Covid-related injuries in nursing homes were recorded during the same week.

Since the outbreak, the disease has been recorded on the death certificates of 44,199 residents from care homes in England and Wales. The figures cover deaths of care home residents in all settings, not just in care homes.

The ONS reported that 170 816 deaths occurred in the UK, where Covid was listed on death certificates.

Robert Jenrick, Conservative MP and ex-Housing Secretary, said that he was pleased with the ONS statistics which show that the death rate for those living rough on the streets is at its lowest level in three years.

Every death is a tragedy. Numbers of deaths from drug-related causes show us that rough sleeping can be a serious health problem. This is why the NHS and Government need to urgently deal with it.

“These statistics are a testament to the fact that the government, along with the Everyone in Program I introduced as Secretary of State during the pandemic, have taken steps to save many lives.

“As the world emerges from the pandemic it is important to remember our promise to stop rough sleeping at the end of parliament.

“There are still many things to do. It is morally unacceptable that our society suffers from homelessness. This should be the objective of government to make progress.

England and Wales experienced an increase of deaths in the last year, making their national total nearly 80,000 more than the number recorded since the outbreak.

Since 2005, the number of home deaths in England and Wales have steadily increased. Thousands more chose to die at home than in a hospital. However, the percentage rose by nearly 30 percent in 2020 when compared to last year. This was because Britons were instructed to stay home and protect the NHS, saving lives, during the Covid crisis.

ONS separate data showed that there were 41,000 more home deaths in 2020 for all causes than 2019 and that the peak in May was due to people dying at their homes.

Figures for 2021, which were up to June, showed that there were almost 25,000 more deaths in the home than the average for this time period over the past five years. This casts doubt on lockdown as the only reason.

The Government lowered its message of’stay away’ and told the NHS to keep treating non-Covid cases, even though Britain was still under third lockdown.

Many have questioned the wisdom of locking down people and whether they were doing more harm than good for their health. The lockdowns led to many people not seeking treatment for fear of contracting the virus, disrupted scans for cancer and prevented them from getting medical care.

Experts call for more research into whether people choose to end their lives at home or are being left in pain by the system that is unable to care for them.

Official figures reveal that 688 people were homeless in 2020.

New estimates show that 688 people died from homelessness in England and Wales.

The ONS, Office for National Statistics stated that this is the first annual decline in deaths recorded since 2014.

It said that the decrease of 11.6 percent from 2019 wasn’t statistically significant.

Also, the estimated death rate is 42.7 percent higher than in 2013, when data was first collected by the ONS.

According to the ONS, the ONS believes that the 2020 numbers may underestimate the number of homeless people.

The Every In scheme which brought thousands of homeless people to safety in the midst of the pandemic made it difficult to record the names of those who were homeless.

The ONS stated that people were offered emergency shelter such as hotels in order to ensure their safety. Because there is no centralised record, this makes it difficult to determine the deaths of those who are homeless.

Figures include people dying from starvation or who used emergency or temporary accommodation around the death.

This total includes all deaths identified and an estimation of the likely death rates for homeless persons.

The ONS stated that about half of 2020’s deaths occurred in 2020 because death registrations were delayed.