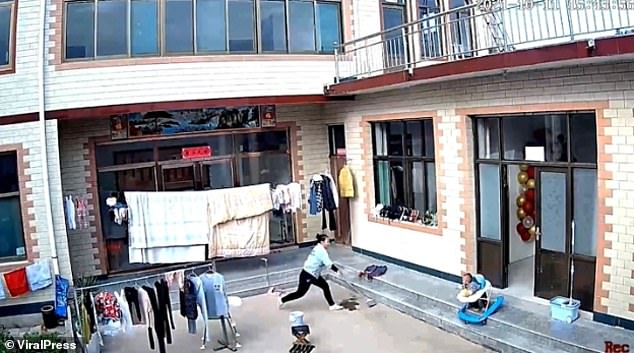 Be careful! Quick-thinking mother uses broom as a stop to her son’s fall from his baby walker, which he is currently on the ground.

By Mark Tovey For Mailonline

This is the moment when a quick-thinking mom used her broom in order to prevent her son’s headfirst out of the baby walker.

CCTV footage shows the boy, in a walker, approaching his mother as she sweeps the yard in Handan in Hebei province on October 11.

The mother of the little boy sees him heading for a tumble, and responds with cat-like reflexes.

The mother was busy sweeping Handan, Hebei province in China, and raced to stop her toddler from falling headfirst off his walker on concrete.

The mother sprints across the courtyard as the mother sees the little boy stumble on the stone steps and threatens to throw him out onto the concrete.

The mother charges the father with the broom in her hand, throwing the dustpan to earth.

Just in time, the mother uses her broom just in case the baby falls off the walker’s head.

A red jacket is worn by an older woman, which could be the grandmother of the boy.

His mother is standing behind him as he appears at the door in his walker. She sweeps the courtyard with her back to the toddler.

The older woman assists the boy’s mom to steady her walker, before lifting the child from his walker and securing him against her body.

After the drama has ended, a man appears at your door, looking confused. Two women comfort the boy, who had survived a close call encounter.

The incident closely parallels a viral video from Ho Chi Minh, Vietnam, in which a mother’s lightning-fast reflexes saved her baby from falling off a bed.

While her baby was playing on November 16, 2020, the mother was making sure that her bed was covered with fabric. 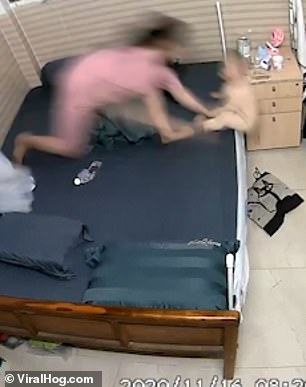 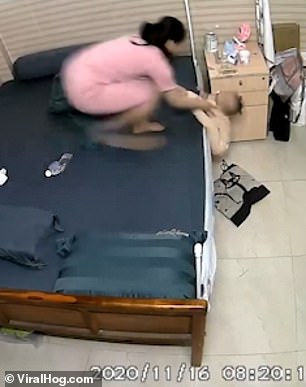 The mother was in Ho Chi Minh, Vietnam. She was wrapping a length fabric around her bed, while her baby played Monday, November 16. She grabbed him and he fell.

The baby fell off the edge as she began to twist the fabric and push it upwards.

It was only her quick response that prevented the child’s head from hitting the hard-tiled floor.