Scientists develop a vegan alternative for leather from fungi 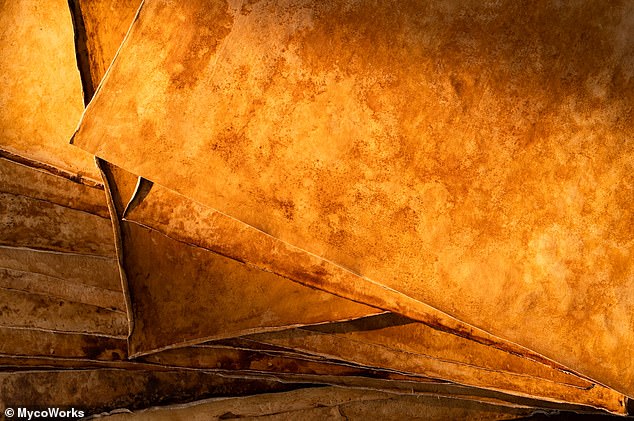 Scientists have developed a vegan alternative for leather made from fungi that looks and feels just like the thing.

Created by San Francisco-based biomaterials company MycoWorks, the fake leather is made from mycelium – the tubular filaments found on fungi.

It is also more ethical than genuine leather which is made of animal skins.

MycoWorks collaborates closely with leather artisans who have a wealth of experience in crafting finished leathers to ensure that it is indistinguishable form real leather.

MycoWorks in San Francisco created the vegan leather. It is made of mycelium, which are the filaments that can be found on fungi. 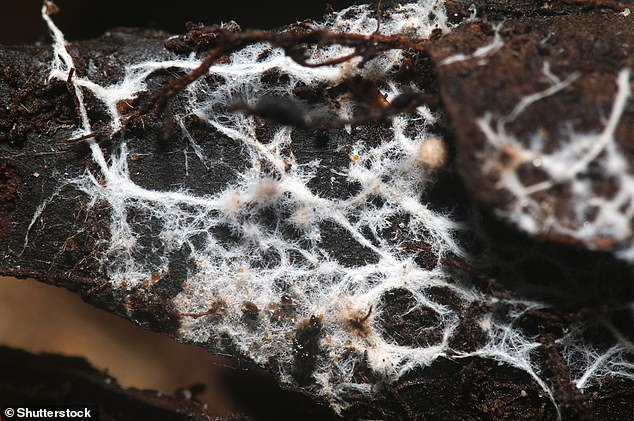 Mycelium (pictured) is the tubular filaments found on fungi. Mycelium can be found almost everywhere on Earth.

Mycelium is one of the earth’s most powerful agents of regeneration and carbon sequestration.

This is the network of fine threads that form mushrooms. A useful analogy could be the stem and roots of plants that ultimately produce fruit.

Mycelium is a plant that grows almost anywhere on Earth. It can often be found both in soil and within forest beds.

Garments that use mycelium would also be biodegradable, potentially putting a stop to the damaging environmental effects of ‘fast fashion’.

‘It can give the same emotional response as an animal leather,’ Dr Matt Scullin, CEO of MycoWorks, told the Guardian. “It feels rare and has the hand-feel.”

Mycelium refers to the endlessly-renewable root structure for fungi. Mushrooms are their ‘fruit’.

Leather substitutes can be produced from fungi by upcycling low-cost agricultural and forestry by-products such as sawdust.

These serve as a feed for the growth of mycelium – a matted mass of elongated fungal threads – which grow into a sheet and within a couple of weeks the fungal biomass can be harvested.

MycoWorks’ patented technology, called Fine Mycelium, can be grown from fungi in trays in a matter of weeks.

Fine Mycelium is said to resemble leather in appearance, feel and strength but outperforms it in durability and strength.

This technology improves the strength and endurance of mycelium’s growth. 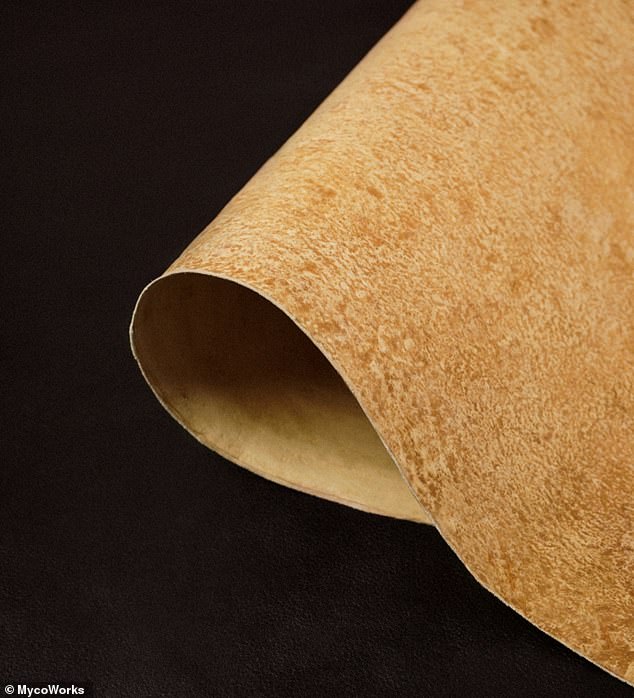 MycoWorks states that Fine Mycelium is not a substitute, but a new material. It has its own unique characteristics. 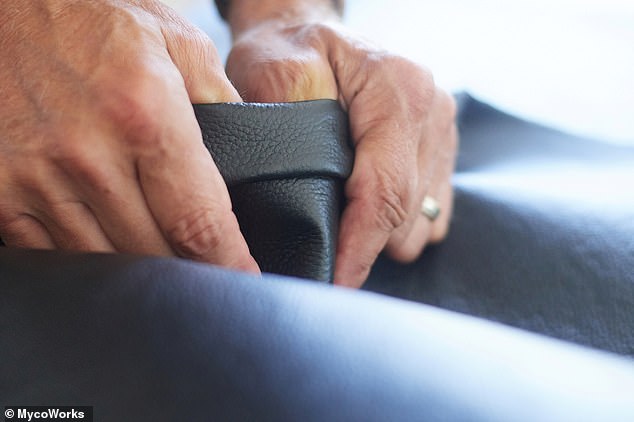 Reishi, which was made in California, is finished in Spain’s heritage tannery, Curtidos Bazia.

The finished product, called Reishi, has been tanned and finished by MycoWorkss tannery partner in Spain, a firm called Curtidos Badia.

MycoWorks is not recommending it as a replacement for leather.

Leather from animals is often made from both sheep and cattle as well, along with lambs, sheep, and goats.

The ethical concerns associated with leather made from the hides of such animals raise eyebrows as do concern about deforestation as well as greenhouse gas emissions related to livestock farming. 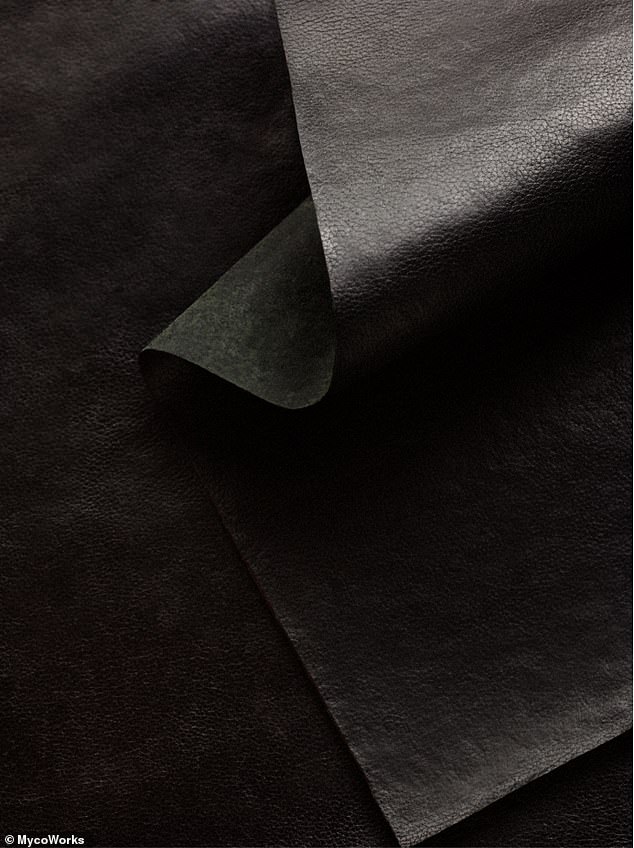 This material is ethically more sustainable than leather made from animal skins. 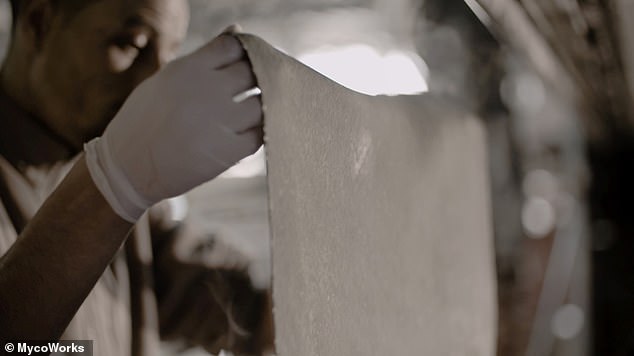 Fine Mycelium is a MycoWorks patented technology that can be grown in just weeks from fungi within trays.

Vegans who aren’t vegan will appreciate ‘leather” products that are both ethically and ecologically friendly.

This philosophy applies not just to a vegan diet but also clothing, furniture, and anything else that could have been subjected to animal testing, such as make-up.

Vegan leather has already hit the catwalk – in 2019, eco-conscious designer Stella McCartney unveiled the first purse made from mycelium.

As part of her spring 2022 collection, she then displayed sustainable mycelium bag designs at Paris Fashion Week in October.

MYCELIUM-COFFIN PRODUCES NUTRIENTS TO THE SOIL AND HELPS BODIES DECOMPOSE FASTER, SO THAT TREES and PLANTS DO NOT OVERGRAIN.

Dutch startup gets back to basics using a mushroom coffin made out of mycelium, which is the vegetative component of fungus.

Bob Hendrikx, its inventor, claims that the Living Cocoon accelerates the process of decomposition, eliminates harmful materials from ground, and aids in the growth of new plants.

Hendrikx explained that it can take up to 10 years for an embalmed corpse to completely decompose in a wood coffin. A corpse in a Living Cocoon only takes two to three years.

Hendrikx stated that green caskets can be used to reverse the destruction caused by humanity on the environment.

Hendrikx was successful in testing the first client. He was then buried in the Living Cocoon on September 2020.

Learn more: The green Mycelium coffin is a viable alternative to the funeral home for the dearly deceased