The jaw-dropping £325million Lufthansa ‘superyacht for the skies’ 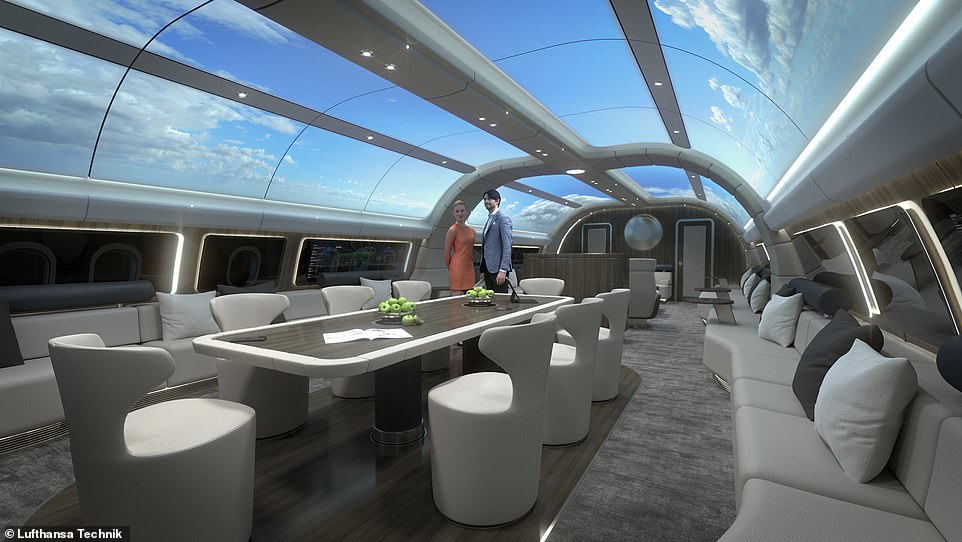 The stunning superyacht “superyacht for skies” has been revealed. But, just like the yachts you see on the water, they don’t come cheap. This is too much for even a millionaire.

What is the cost? A cool £325million or thereabouts, which buys a wide-bodied Airbus A330 dramatically refurbished by German design studio Lufthansa Technik into a plane it says serves as a ‘multifunctional exploration vessel’… that flies.

The concept plane – named the ‘Explorer’ – boasts luxurious features such as a ‘flying discotheque’, a glass floor and a balcony, which offers passengers ‘a unique view of the airport and its surroundings’ at an elevation of 13ft (4m) over the tarmac. 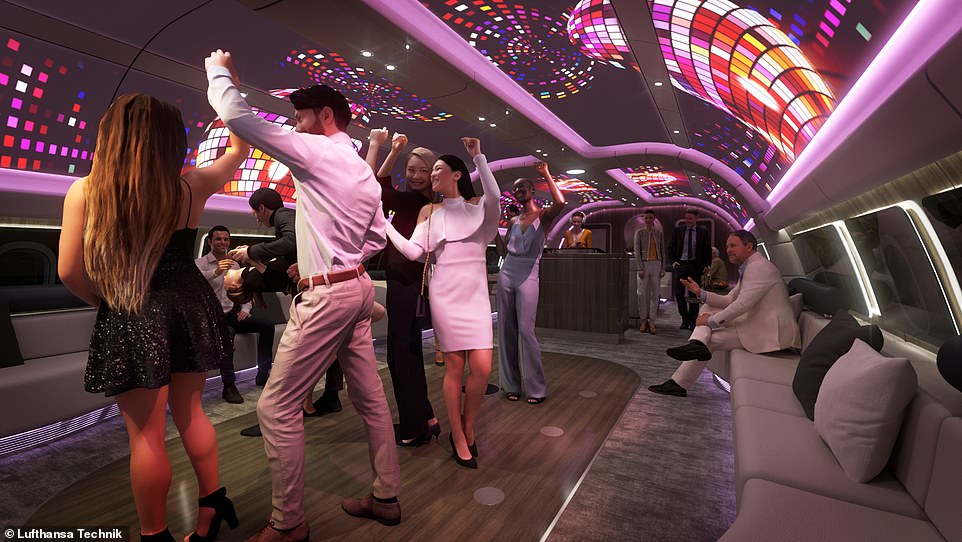 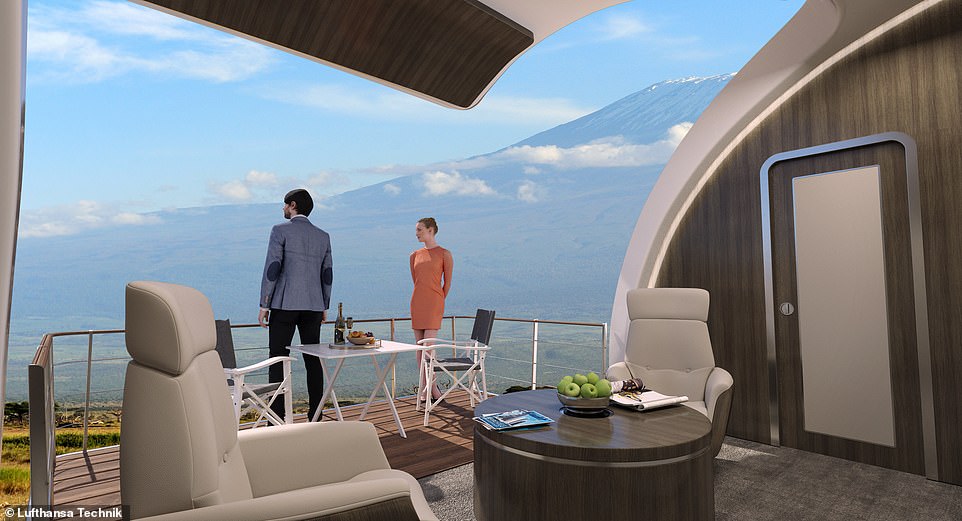 The plane’s balcony, pictured, offers passengers ‘a unique view’ at an elevation of 13ft (4m) 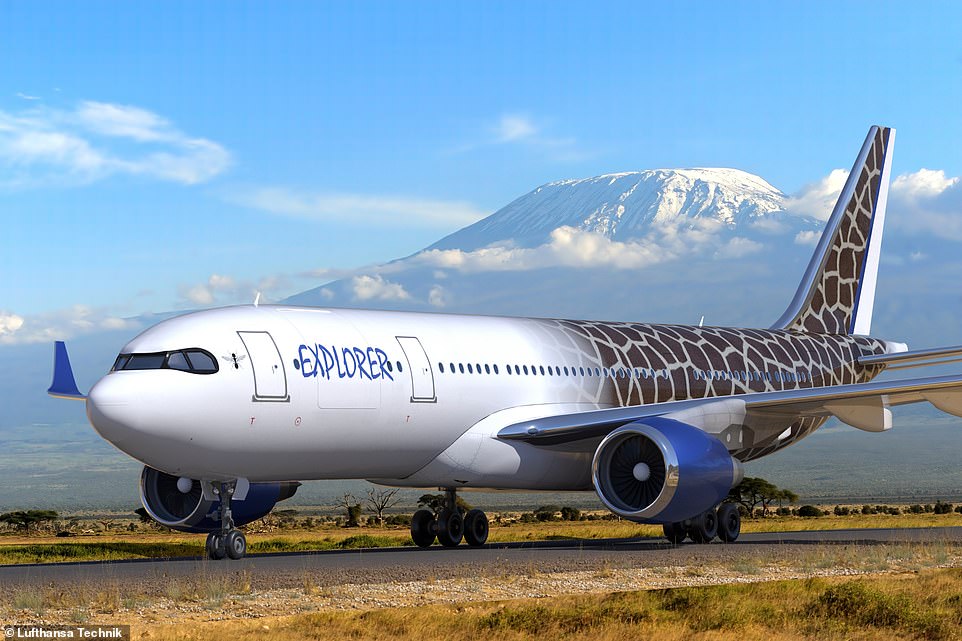 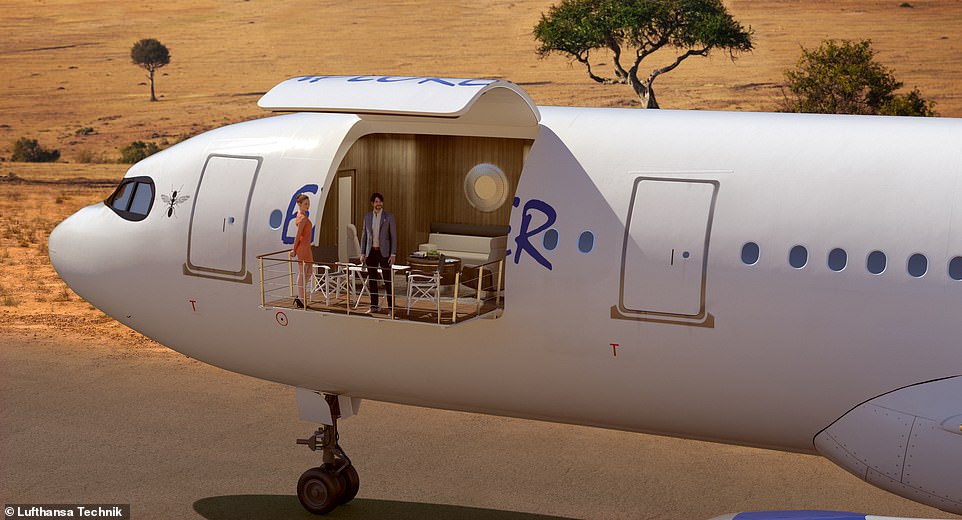 Lufthansa Technik claims the plane is a multifunctional exploration vessel for VIP passengers.

The multifunctional lounge area at the centre of the aircraft has a projection system built into the walls and ceilings, which displays virtual day and night skies, architectural forms or an ‘animated underwater world’.

These renderings demonstrate that the plane can transform into a club.

From the lounge, guests can wander to the bedrooms and guest rooms, which, according to the plane’s floor plan, are located at the rear end of the aircraft.

Lufthansa Technik says that the sleeping arrangements will provide passengers ‘with all comforts and amenities that they can expect from a five-star hotel on the ground’. 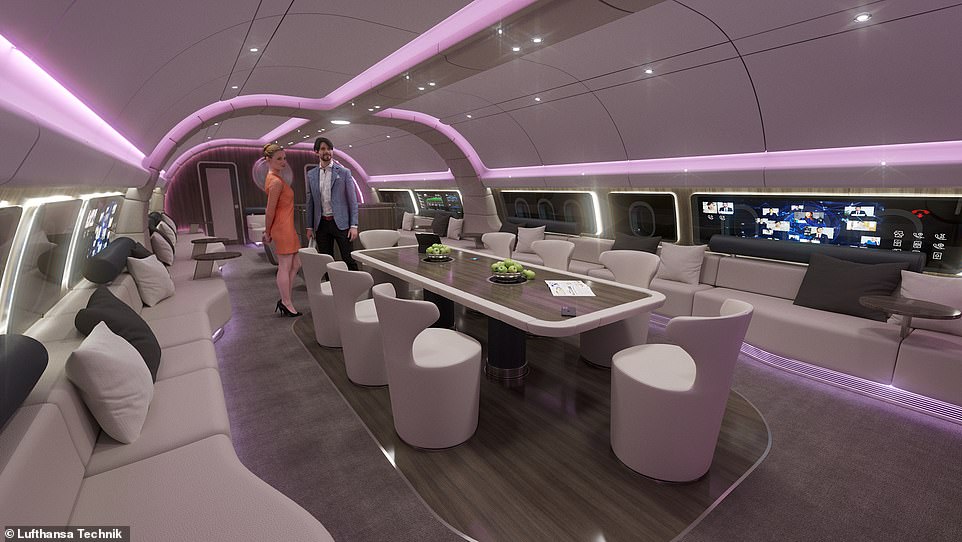 A projection system is built into walls and ceilings in the multifunctional lounge space at the heart of the aircraft. 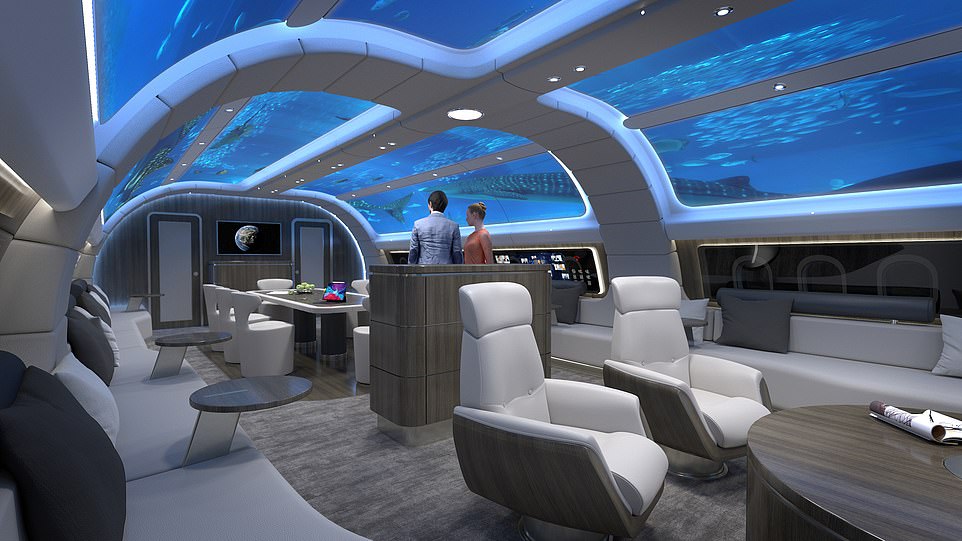 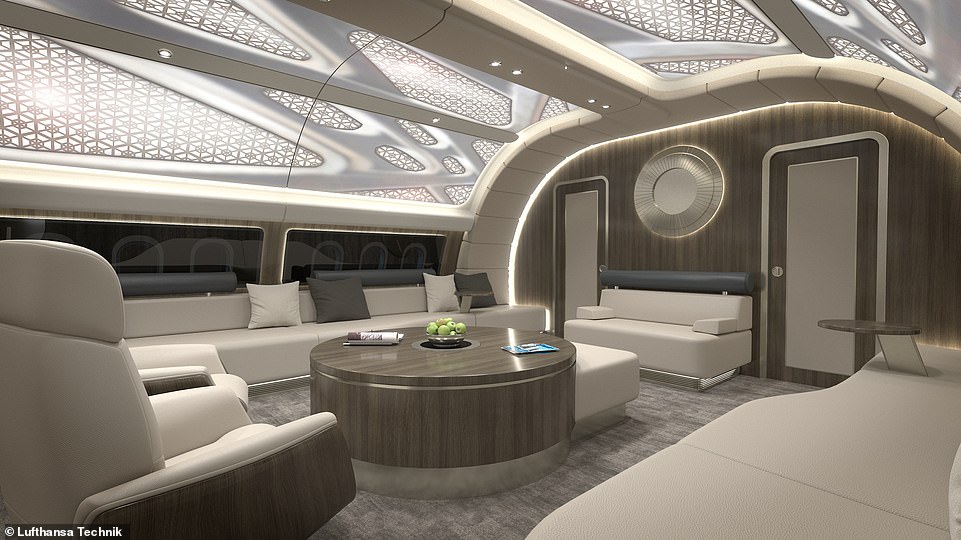 In the lounge, architectural shapes are projected on the ceiling. It was built for VIP World Explorers, a rapidly growing target market.

The concept also includes offices, bars, dining areas, and conference spaces. It was unveiled during the Dubai Airshow.

‘Fitness and wellness’ spa facilities are available in the multifunctional room at the rear of the aircraft, which can be converted into a ‘flying hospital room’ depending on the needs of the passengers.

They can even bring their cars and ‘off-road vehicles’ onto the plane. 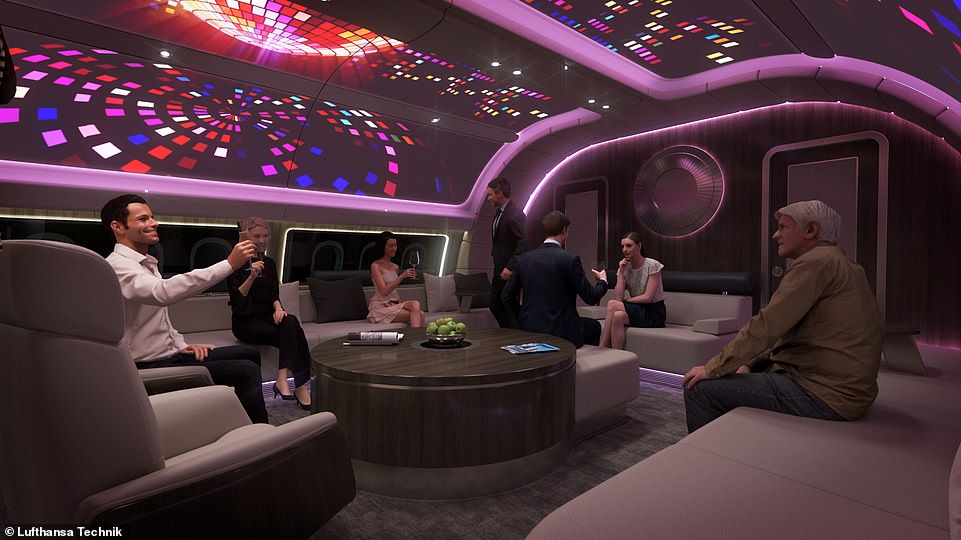 Although the plane is capable of carrying up to 12 people, the studio has the ability to modify the design so that it can hold up to 47 passengers.

In the lower deck mobility lounge, the fleet of cars will be “attractively displayed”. The glass floor at the main deck allows passengers to see the vehicles as they take off.

The plane can carry up to 12 ‘VIP passengers’, but the studio can vary the design to accommodate up to 47 people. Such a redesign could feature an ‘individual owner’s module with a master bedroom and bathroom as well as an office’ or ‘larger areas for the crew’.

The plane’s superyacht credentials were cemented by the fact that its preliminary unveiling took place at the Monaco Yacht Show in September. 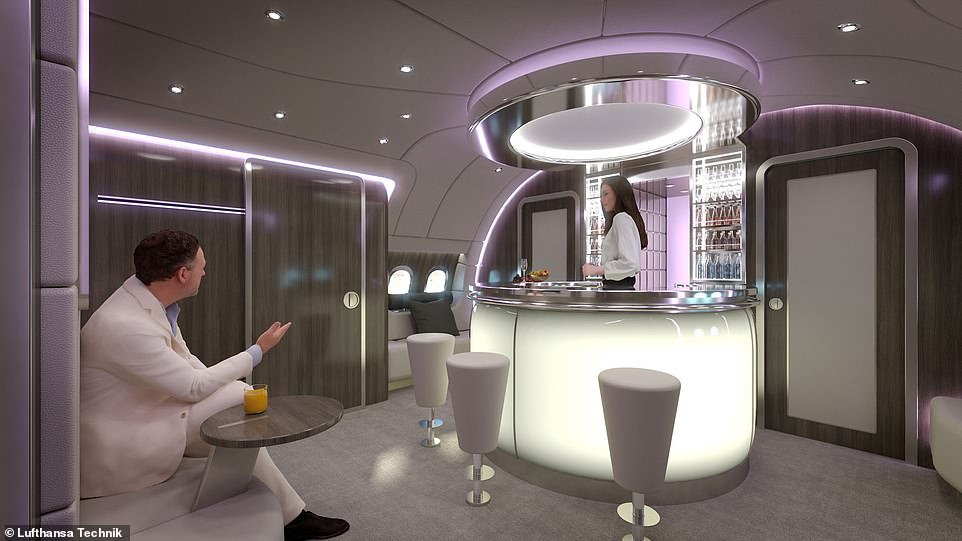 This is a rendering of the new bar in the Airbus. The Airbus also offers offices, dining areas and conference spaces. 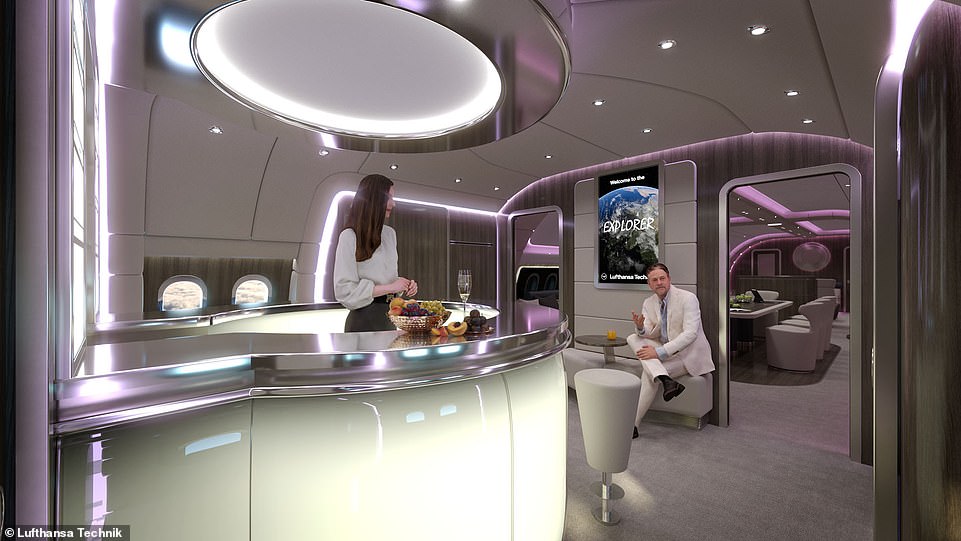 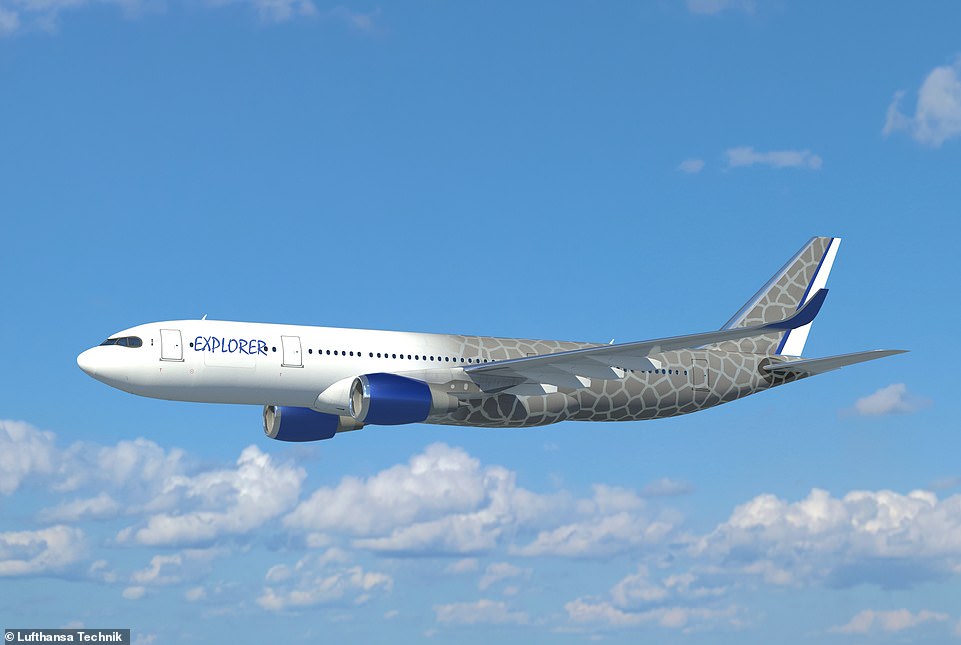 Lufthansa Technik will take your orders and estimate that the refurbishment could take over a year. 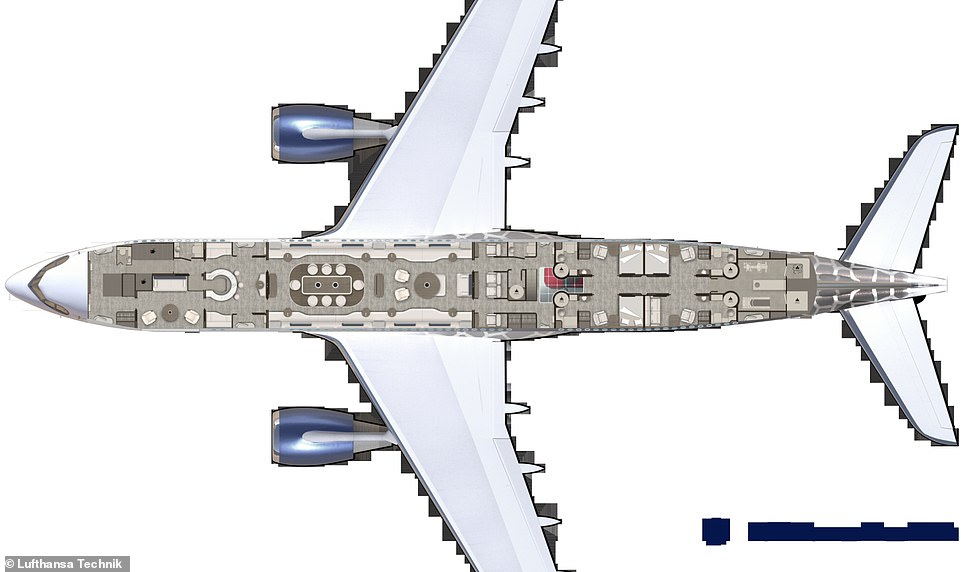 ‘For this fast-growing target group of VIP world explorers, we have therefore now created a flying platform for the first time.

‘Unlike a yacht, however, our Explorer aircraft allows passengers to travel to the other side of the globe within hours and set up their own individual base camp for further activities. This opens up completely new possibilities for explorers.’

Lufthansa Technik can take orders for this concept. It estimates it will take at least one year to finish the refurbishment of the aircraft to the required “high-class” standard.