Former Afghan interpreters for the British military fleeing the Taliban are facing ‘sinister’ questioning by Pakistani intelligence officers about their work after slipping across the border.

Translators report that Inter-Service Intelligence officers, which have close links to the Taliban, told the UK they need access to interpreters before exit visas can be issued.

Britain has promised those who were left behind after the RAF evacuation ended two years ago to be granted sanctuary. If they reach a neighbouring country, such as Tajikistan and Pakistan, they will be allowed to return to the UK.

Sharif Karimi, 31, who was held by Taliban gunmen in a ‘tiny box’ for four days, pictured here with his wife and children after being flown to the UK to start a new life

Interpreters and others who fall under the Afghan Relocations and Assistance Policy are currently escaping, mostly with the families they love, to Pakistan. Some have even crossed the border illegally.

They are the focus of the ISI, Pakistan’s premier intelligence agency, which was operating in Kabul within 24 hours of the Taliban taking the Afghan capital.

Campaigners for translators called the questioning ‘extremely sinister’, fearing information could be passed back to the Taliban and used in the hunt for those who stood shoulder to shoulder with UK troops in Helmand.

Rafi Hottak, a former supervisor for translators, said: ‘It is both worrying and disturbing that an intelligence service with links to the Taliban is given access to those who risked their lives for Britain.

‘There is no doubt that the type of information they are seeking could be of considerable use to the Taliban in the search for families who are still in hiding and facing the threat of revenge.’

One former senior translator, Sharif Karimi, who was quizzed, said: ‘It was intimidating. I was told it was something that I had to do or I would not have been allowed to leave with my family.’

The 31-year-old, who had been held by Taliban gunmen in a ‘tiny box’ for four days after they marched into Kabul, claimed intelligence officers asked why his captors had not killed him.

‘They wanted to know details of my work, where I had been based, who I had met, of my family and where they lived,’ he said.

‘They wanted to know why I had not been killed by the Taliban.

‘Then they wanted to know about my father, if any of us had worked for the old Afghan government, about my finances and other personal questions. We had to do it but every question you feared there was a trap being set.’

Sharif was speaking out for the first-time about his kidnapping experience from a quarantine hospital after he was flown to the UK with his family, his wife, and four children. He also told how the Taliban had held him in ‘a small box room that was about one metre wide and one metre high’.

Later he discovered this was where weapons were kept by guards at Finland’s embassy which was abandoned when the Taliban swept into Kabul.

‘I thought I was going to die. They kept claiming that I was an infidel spy and that I was Sharif, an interpreter of the British. But I denied it. I knew I was talking to save my life,’ he added. 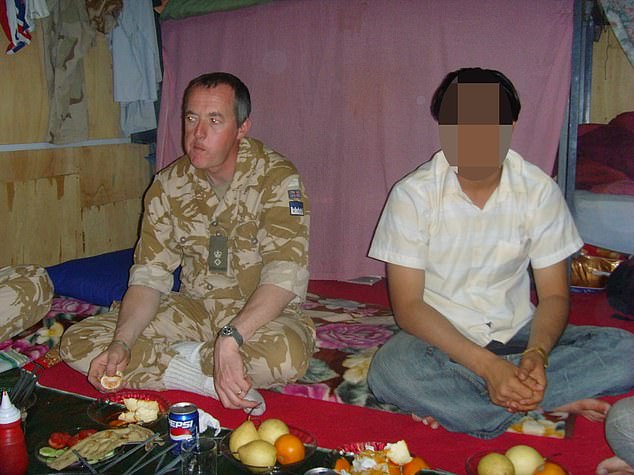 Sharif Karimi claimed that Pakistani intelligence officers had asked him why his Taliban captors hadn’t killed him.

Sharif served three years in the UK forces, and at one point was responsible for 120 British Army interpreters.

He was freed after his family discovered where he was being held and agreed to pay a ransom of over £20,000.

Sharif’s story has been highlighted by this newspaper’s award-winning Betrayal of the Brave campaign.

He was initially refused sanctuary for his dismissal, but he received approval to move in August after the intervention of Ben Wallace, Defence Secretary.

Last night Sharif said: ‘To be safe in Britain and to begin a new life where my children can go to school will be a dream – one that days ago I feared would never come true because I did not know if I was going to live.

‘I am very grateful to British diplomats and to the Daily Mail campaign for never giving up on me when the future was dark. It has helped to save me and my family.’

Another former interpreter claimed that the ISI questions had been about how and where he got into Pakistan. He was also asked to identify his Pakistani friends, and who had protected him.

Although the interpreter was not issued a Pakistan visa, he was able to travel to the UK with his family. Pakistan officials stress it is their ‘duty’ to question anyone entering the country illegally.