Coronavirus cases fall for the EIGHTH day in a row: Infections drop to 38,009 but deaths rise to 74 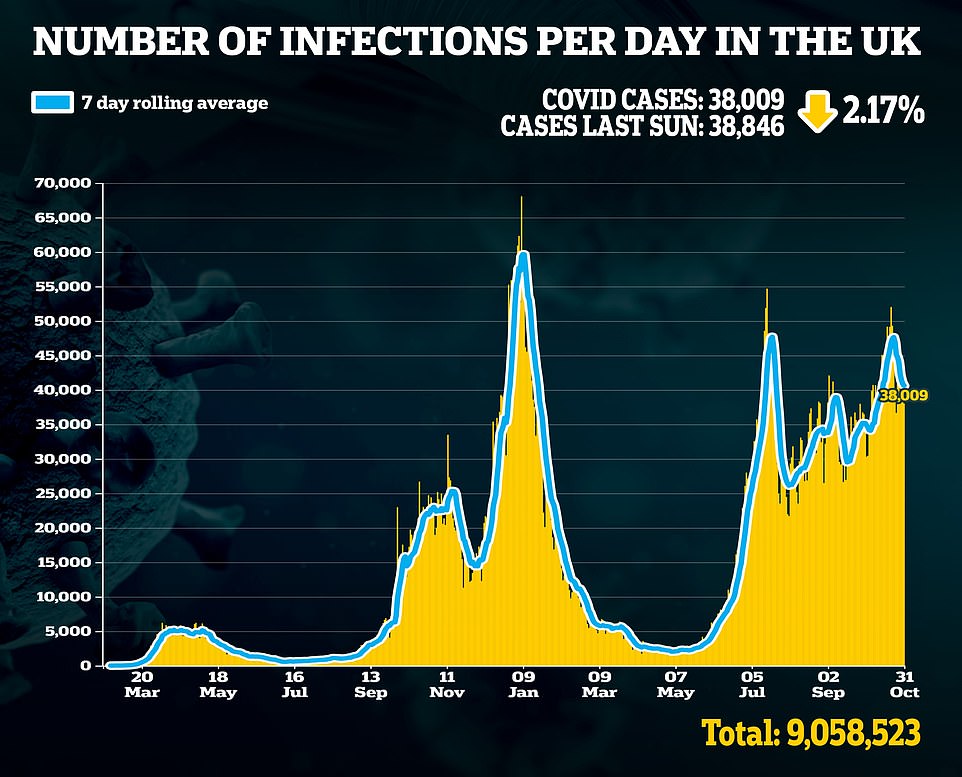 Coronavirus cases are down for the EIGHTH straight day. Infections fall to 38.009, but deaths rise up to 74

By David Averre For Mailonline

After reporting 38,009 new Covid cases in the past week, the government indicated that the spread of Covid is slowing down. This was the eighth consecutive day of falling cases and a 13.5% decrease in new cases compared to the previous seven days.

However, another 74 people were reported to have died within 28-days of a positive COVID-19 test. This meant that the seven day total of Covid-related deaths rose by almost 16% compared to the previous week.

Because of the time it takes for the virus and disease to develop, hospitalisations and deaths often lag behind daily infection changes.

The figures come after separate official data released on Friday showed more than a million people in England were infected with Covid on any day during the last week before half-term.

Bosses at the Office for National Statistics (ONS) estimate around one in 50 people — the equivalent of 1,102,800 — would have tested positive on any given day during the seven-day spell ending October 22. It claims that infections have risen by almost 13% in a single week, an increase not seen since the worst days of Britain’s pandemic crisis early January. 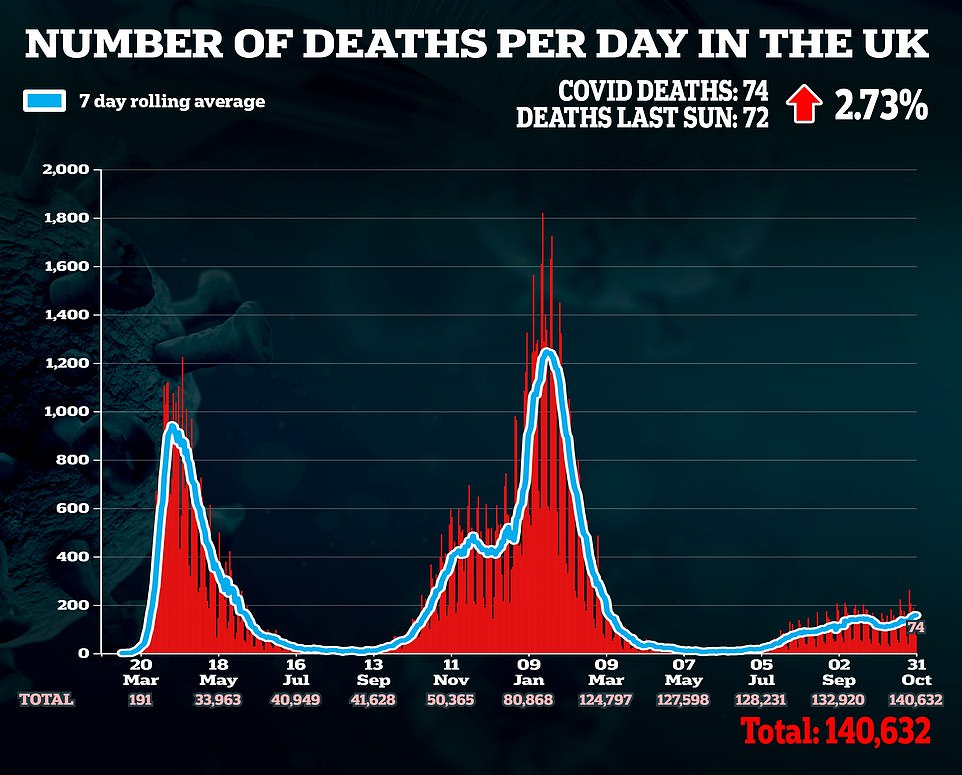 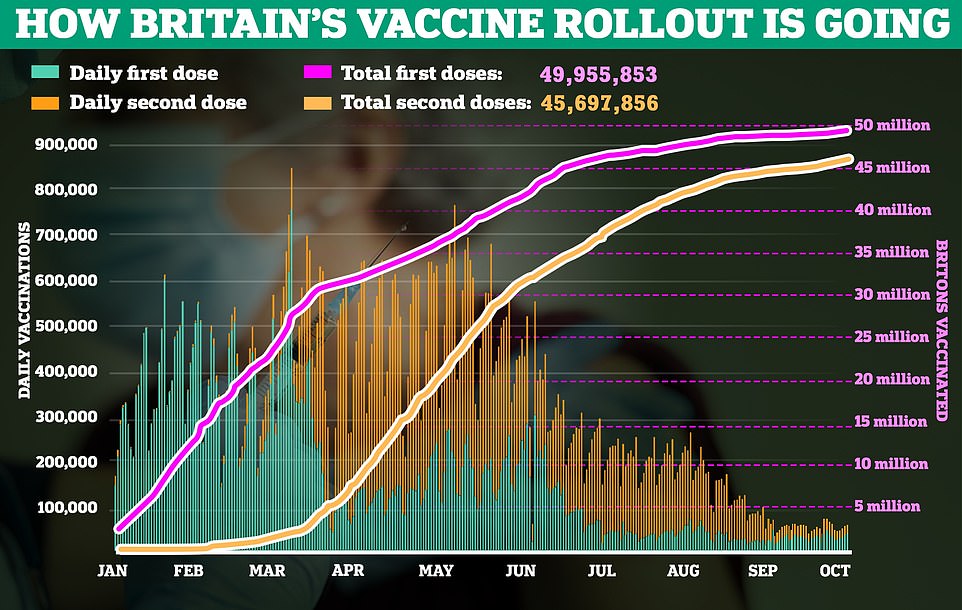 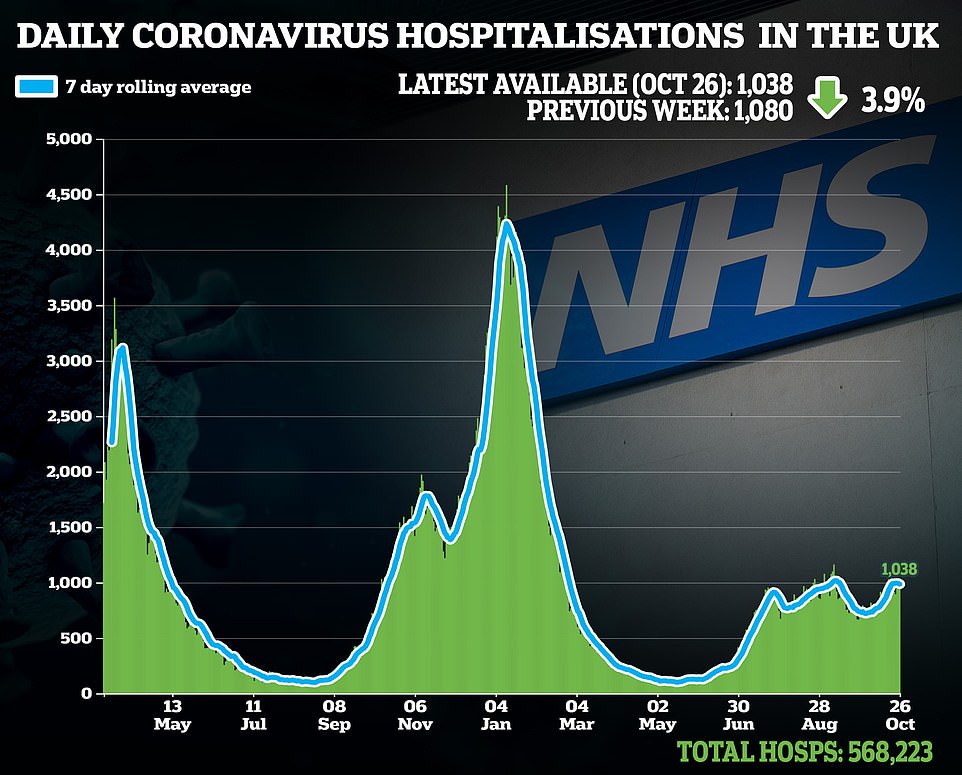 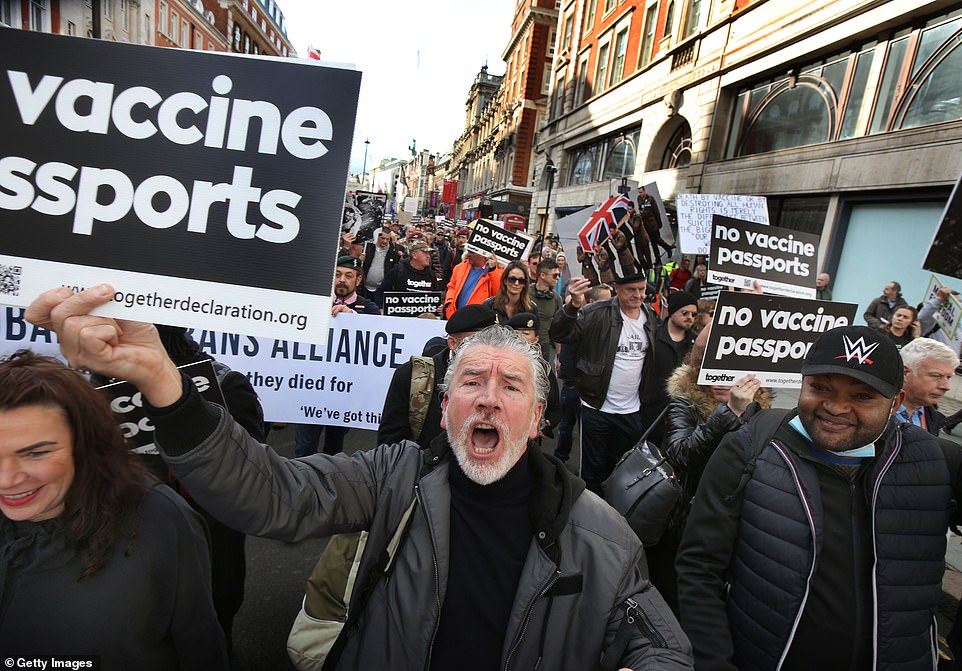 On Saturday afternoon, thousands of protestors marched through Piccadilly Circus to demand medical freedom, no vaccination passports, and no future locking downs 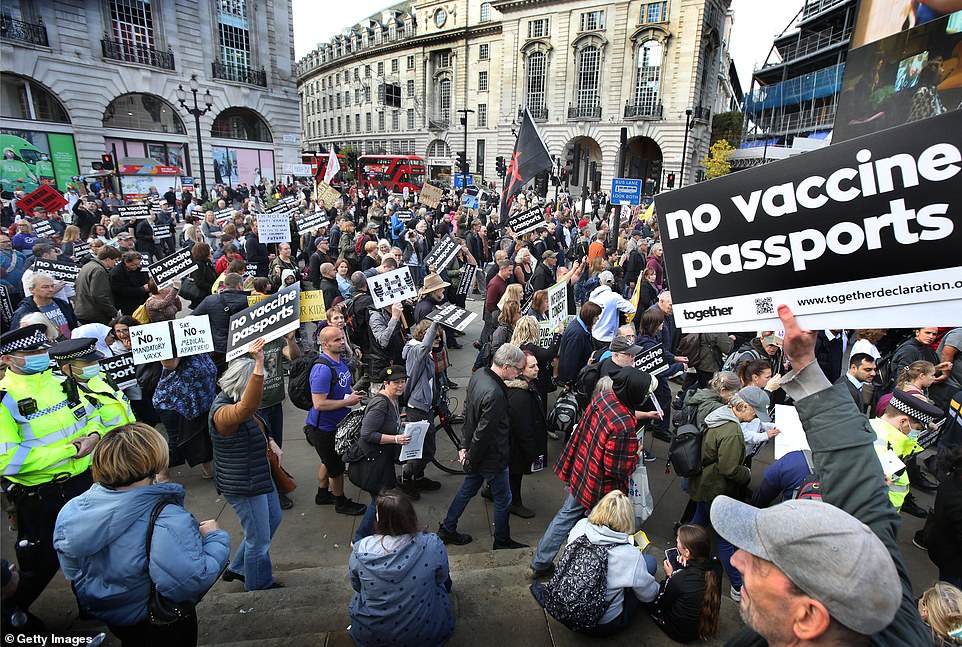 Yesterday, protestors gathered in central London at around 1pm to protest against the introduction of vaccine passports under the Government’s winter Covid Plan B.

No10’s advisors stated that it was likely that cases will eventually fizzle out in children due to their high levels of immunity after the back-to class wave.

They also claimed that half term would act as an indoor fire-breaker and stop children from mixing indoors.

‘Professor Lockdown’ Neil Ferguson, an epidemiologist who sits on SAGE, on Friday argued Plan B — which would see the return of face masks and work from home guidance if the NHS becomes overwhelmed — ‘shouldn’t be necessary’, if cases keep dropping and the booster roll-out continues at speed.

Separate data from Thursday’s largest symptom-tracking survey in the country suggested that Britain is ‘worryingly close to’ recording 100,000 new Covid infections each day.

Professor Tim Spector is the epidemiologist who ran the study. He suggested that the official Government daily count could be greatly underestimating the extent and prevalence of Covid.

It comes as Health Secretary Sajid Javid today asked all secondary school and college students for testing regardless of symptoms before they return next week to classes.

Mr Javid stated, “It is crucial that they are taking free and simple rapid tests that will help identify Covid infections from people who aren’t showing symptoms to keep it at bay.”

London witness a march by thousands of anti-vaccine passport demonstrators

Yesterday saw thousands of protestors take to the streets of London to protest against the introduction of vaccine passports under the Government’s winter Covid Plan B.

At around 1pm, protestors marched through Piccadilly Circus, the city’s central area, bearing signs that read ‘no vaccine passports’.

As they walked through busy streets, few wore masks. Some carried signs that stated’medical liberty’ while others flew St George’s flags.

Video footage shows demonstrators clashing with police officers outside the Australian Ambassador as the most peaceful protest turned violent.

The video shows protestors shouting at three officers outside the Embassy. A woman pushes an officer, before he pushes them back. A man shouts “stop the violence!”