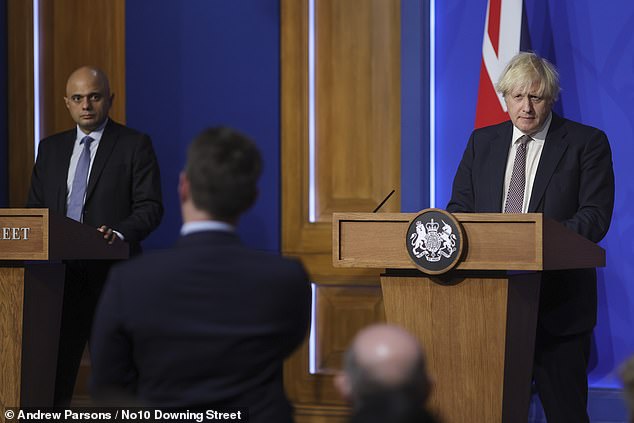 Boris Johnson was back in motivational mode – rubbing shoulders, ruffling hair and generally geeing everyone up again.

The Prime Minister bounded in to Tuesday’s Downing Street press conference to issue a rallying cri de coeur. We all needed a lift. Booster jabs, namely.

The arrival of the ominous-sounding Omicron strain called for ‘another great vaccination effort,’ he said.

It was time to ‘throw everything at it’.

He would mobilize the Army. He’d throw huge amounts of cash at NHS workers so they could work round the clock. To get jabs in the arms.

‘We’ve done it before and we’ll do it again,’ he cried. Boris would make an excellent cornerman with a simple sponge and a rusty bucket.

Accompanying the PM was Health Secretary Sajid Javid – awkward, slightly robotic. He is much more pleasant than Matt Hancock’s predecessor, though. What a mercy it is that Hancock isn’t around for this development. He’d be puffing his chest out and milking it for all its worth.

The Saj was also a Natty guy. The PM sat beside him, and he was like a shiny Tesla sitting in the bay alongside a Fiesta with dog hair.

Unfortunately, he was too busy looking in the wrong direction. Boris may have been tricked by Downing Street media to look more attractive.

It can be a bit tedious. It is possible that you are a writer of complicated memos or multi-paged PowerPoint presentations.

She heaped praise on her staff, who were ‘working unbelievably hard’. This she repeated several times, until it was almost patronizing.

She spoke out about workers from North Yorkshire, who provided hundreds of shots by candlelight in the wake of recent storms. These poor people. You can only imagine how many Florence Nightingale jokes these poor people must have had to bear.

Many questions were raised by the media regarding Jenny Harries, the UK Health Security Agency chief. She had advised previously that people should socialize less. Did she speak out of her turn?

Boris said that she had. He wanted a ‘balanced and proportionate approach’ while the scientists got to grips with the new strain.

Social events must go according to plan. For some fathers roped into attending their children’s Nativity play this year, this may not necessarily have been the news they were hoping for.

Almost all queries related to the virus were, in fact. Talk of Tory sleaze or Peppa Pig had disappeared in the wind. This is a good break for PMs, considering the Old Bexley election tomorrow. 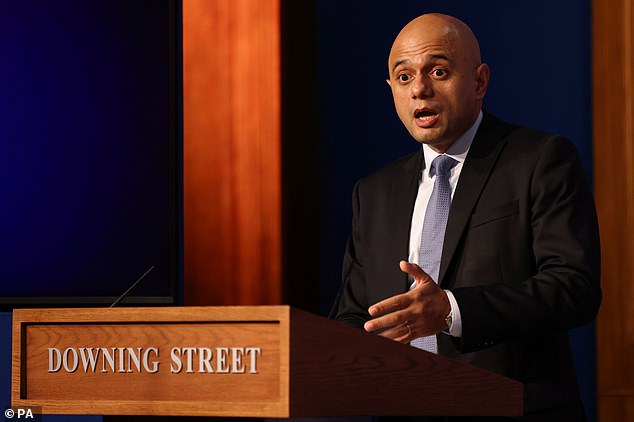 The Saj was also a Natty guy. He sat next to the PM and looked just like a shiny Tesla, which was parked next to a Fiesta covered in dog hairs. Pictured: Health Secretary Sajid Javid during a media briefing in Downing Street

The new restrictions were discussed earlier in the Commons by MPs. Maggie Throup, the vaccines minister was given the task of opening the discussion on behalf the government. Was that a brilliant idea?

Tossing little Throup to the Tory backbench boys to fight was like throwing a hunky tenderloin in with a bunch of hungry hyenas.

Their contributions were so hostile that she started to prefer the Opposition benches. Unfortunately, she had not seen many of them.

Throup was unable to get through her dull monotone. But her colleagues rallied around her and asked her to give them a chance to talk to her in a choir of caterwauls.

‘I have already been very generous,’ she kept saying as she waved them away.

Poor Maggie. She shook her head, and her eyes flickered. An exhausted swimmer is struggling to breathe in the surf.

After 20 minutes, she finally managed to sit down – dazed and disorientated. Nurse! A large brandy and smelling salts please for the minister, if you’d be so kind…