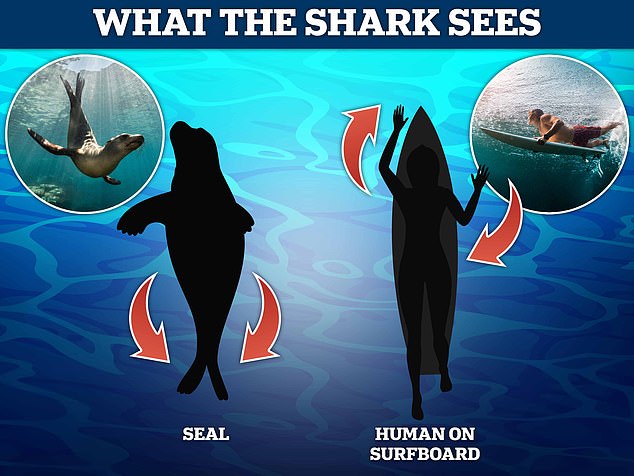 A lot of people portray great whites as brutal human killers. But a new study suggests that shark attacks victims are actually misunderstood.

The vicious marine beasts can confuse humans for their natural prey – seals – because they look the same when viewed from below, the research reveals.

Experts in Australia used “shark sight” to determine how seals or humans on surfboards look when looking up at a silhouette of water’s surface.

They cleverly manipulated footage of swimmers and seals to look like a shark would.

Researchers concluded that sharks may mistake an oval-shaped surfboard as the body of a seal and a human’s arms or legs as the seal’s limbs.

They are completely colour blind or at best have only limited colour perception – and this makes it hard for them to make the distinction.

Researchers in Sydney report that sharks aren’t intentionally attacking humans, but mix them with seals. They’re colourblind and don’t know the difference. 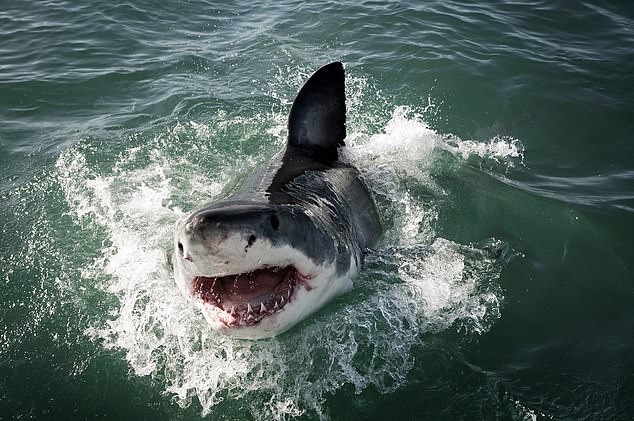 Great white shark (Carcharodon Carcharias). White shark attacks on humans can be rare but they can cause the need to use lethal shark mitigation methods, which can have devastating effects on population numbers.

The largest predatory shark in the ocean is the white shark (Carcharodon Carcharias).

Great white sharks can grow up to 20 feet in length and weigh up to 6,600 lbs. They live for approximately 30 years.

Great white sharks have serrated, blade-like teeth. The upper jaw contains a row with 23-28 teeth while the lower jaw has 20-25 teeth. These triangular-shaped teeth can reach as high as 6.6 inches.

They are very curious and will often poke their heads out of the water or follow boats. However, white shark attacks on humans are rare.

The research looked specifically at juvenile white sharks (Carcharodon carcharias), which can be found in the coastal surface waters of all the major oceans.

‘We looked specifically at juvenile sharks and that’s because they are responsible for the majority of fatal bites on humans,’ study author Laura Ryan at Macquarie University, Sydney told AAP.

“Until now, the potential similarities between humans and seals have been evaluated based upon human vision.

“However white sharks have lower visual acuity than we, meaning they cannot see fine detail and lack colour vision.

Juveniles are less able to see than adults because their eyes have yet to grow to full size like the rest.

The researchers used footage from two sea lions, one fur seal, and humans “doggy-paddling” with a surfboard for the study.

They used sea scooters and mounted cameras to observe how sharks perceive stimuli atop the water.

This data was then pumped into a virtual visual system that analysed the short clips and viewed as shark’s retina would see it – in black and white and without much clarity. 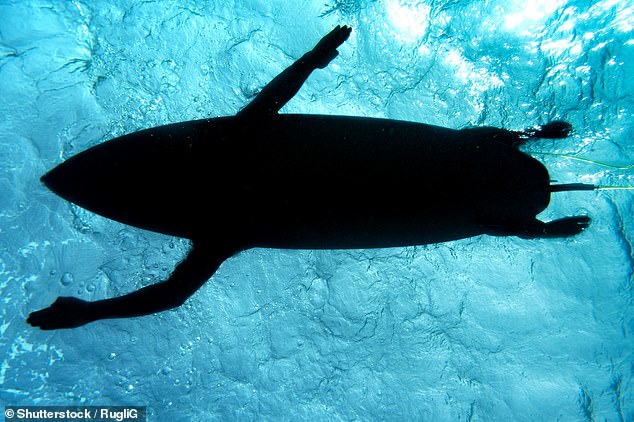 Dead ringer? Below is a surfer at Bondi Beach in Sydney, Australia. The feet look stumpy and resemble the lower limbs a seal’s. 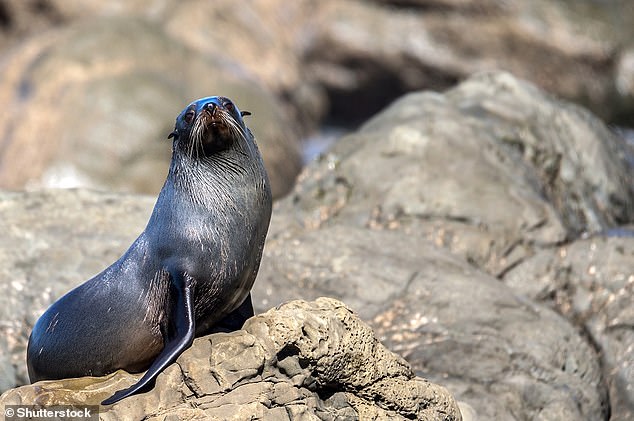 The shark neuroscience data was used to create filters for the video footage. Then, the team created modelling programs to simulate how a juvenile shark would process the shapes and movements of different objects.

They found that motion cues of humans swimming, humans surfing and seals swimming did little to differ.

Researchers found that juvenile white sharks cannot distinguish between seals from humans because of their poor visual acuity.

Dr Ryan, a neuroscientist is interested in shark attacks and surfing.

She said, “The fear of being bitten or bitten by sharks crosses your mind.” “And so, for me, understanding helps me to push those thoughts aside when they occur, since I can rationalise that they are very rare events.

Researchers are currently looking at other ways to alter the way sharks perceive different silhouettes, such as LED lights. 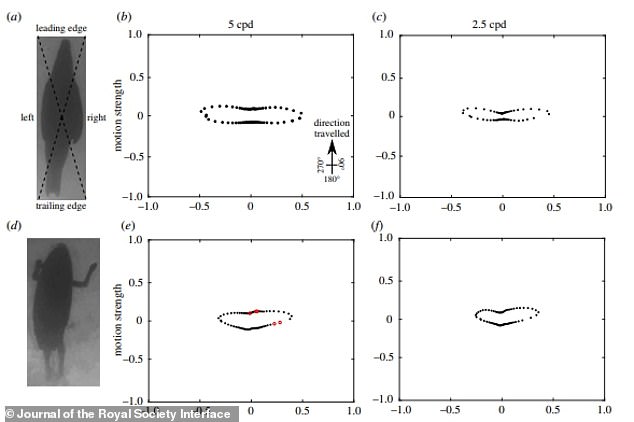 Researchers at the university’s Neurobiology Lab are also developing non-invasive devices based on vision that could help swimmers and surfers avoid shark bites.

Fatal shark attacks are rare. According to the Australian Institute of Marine Science, there are about 10 deaths attributable to shark attacks worldwide each year.

It claims that this compares to the approximately 150 deaths caused by falling coconuts each year.

But when they do happen, it can result in the use of lethal shark mitigation measures, damaging population numbers, the team warn.

‘Shark bites on humans are rare but are sufficiently frequent to generate substantial public concern, which typically leads to measures to reduce their frequency,’ the authors say in their paper, published in the Journal of the Royal Society Interface.

‘Bites can also have adverse consequences for sharks. They often result in the use or continued use lethal shark mitigation measures such as drum lines and deployment of gillnets to reduce shark populations.

GREAT WHITE SHARKS ARE ONE OF 39 SPECIES THREATENED IN AUSTRALIA

Experts warn that more than one-in-10 Australian shark, ray, and ghost shark species are at imminent risk of extinction.

The data is based on the most comprehensive assessment of extinction risks. It shows that Australia is home for more than 25% of all shark species in the world, while only 12 percent are at risk.

The study’s lead author, Peter Kyne, Charles Darwin University, Australia, stated that while Australia’s risk is lower than the global level at 37%, it raises concern about the 39 species in Australia that are considered to be at high risk of extinction.

‘Around Australia many of our threatened sharks or rays aren’t commercially important so they are mostly “out of sight, outside of mind”. However, they need protection at the national, state, and territory levels.

Dr Kyne stated that there were ‘positive signs’ that management and protection are being applied to iconic species like the great-white shark and grey nurse shark. But they are still at risk.

Dr Kyne stated that sharks are still at risk from commercial fishing, which affects them as both a targeted species or as bycatch for industries like tuna.

He explained that each species of sharks has a function… it’s part the web of the ocean community. This explains the importance of sharks as predators within a healthy ecosystem.

The Action Plan for Australian Sharks and Rays, published September 2021, is the first attempt at a national overview of sharks and habitats.

The data shows that the country’s focus on sustainable fishing is having some benefits, with 80 percent of its 328 species not in danger.

Michelle Heupel, coauthor, said that Australia’s comprehensive fisheries management has helped to secure the status of many species. She also mentioned large areas that are unfished, lightly fished, as well the marine protected area network.

45 species are also threatened in other parts, such as the giant guitarfish or the spotted eagle-ray. Australian waters serve as a refuge and ‘lifeboat’.

“But while we should be proud of the secure status for many species, we urgently have to increase our research efforts and management efforts for Australia’s threatened sharks’ and rays.”

The research also revealed that there is not enough information about local shark species. More investment is needed to fill this knowledge gap.

Dr Kyne stated, “For the 328 species assessed in this volume, every one of them has knowledge gaps.”